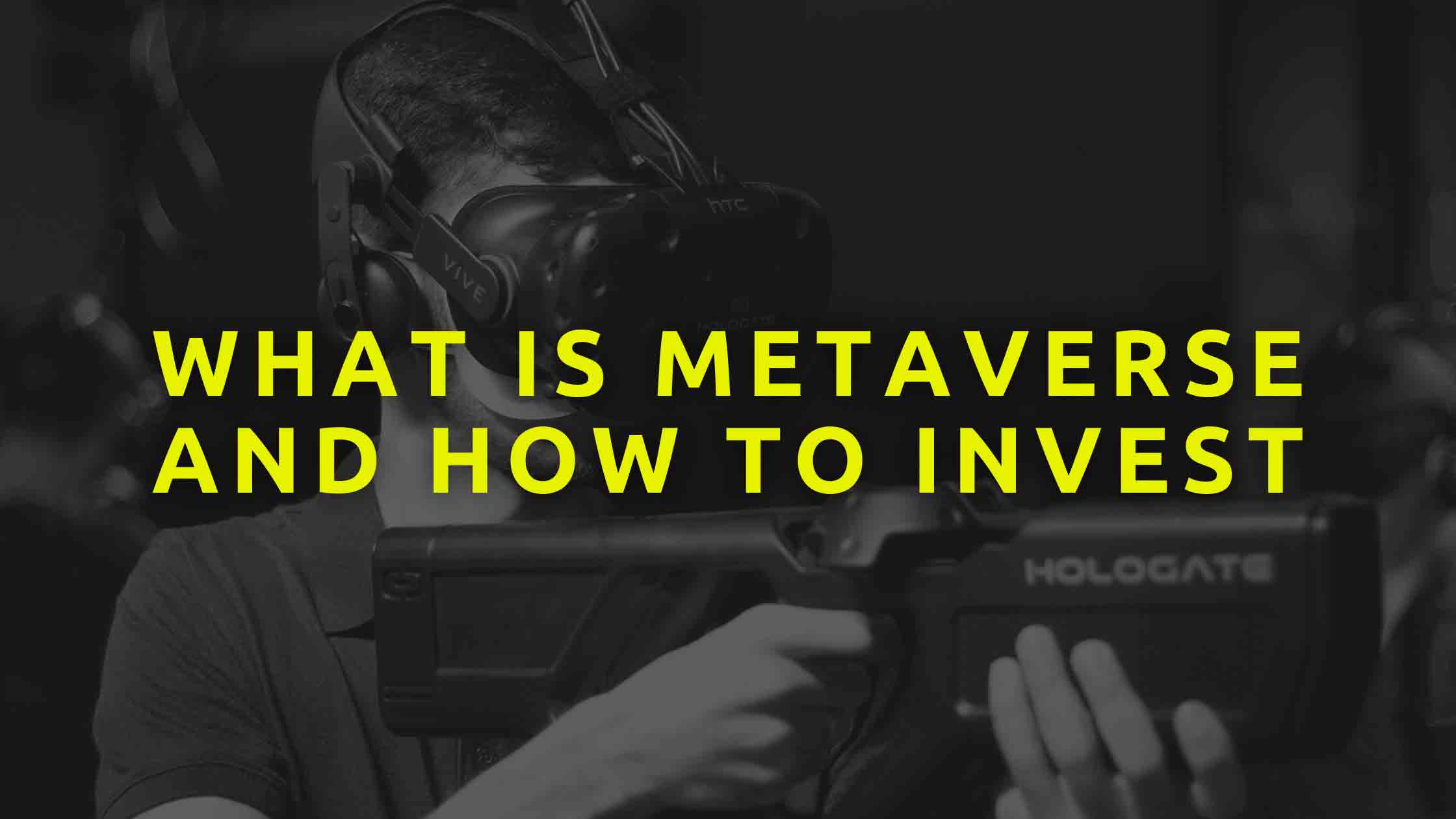 With many projects tied to crypto-activities, the metaverse is seen as the new big investment.

Metaverse has become the biggest buzzword of the moment in technology and every investor wants a piece of it. But what really is metaverse and what are the great opportunities to make money in it?

The emergence of Bitcoin (BTC) in 2008 was the first step in the emergence of a new digital ecosystem that has gained a lot of momentum in recent years.

As a result, terms such as blockchain, token, cryptocurrencies, and NFTs are now part of the vocabulary of many technology enthusiasts.

Within this whole revolution, the so-called metaverse has recently gained a lot of momentum after Facebook officially changed its name to Meta.

Other major companies have also made announcements about what is seen as one of the great promises for the next decade and another step in the development of crypto technology.

We have already had early indications of the potential size of the metaverse economy with virtual land within the blockchain-based metaverses Decentraland and Axie Infinity being sold for over $2 million.

The future of the Internet is not so far off. Several projects and products have already employed this since the early 2000s.

The forerunners of the metaverse include Second Life, launched by Linden Lab in 2003 and Habbo Hotel, made by Finnish company Sulake.

Today the best known metaverses are in the universe of online games such as Fortnite, Minecraft and Roblox.

The big revolution is not in the concept of virtual immersion, but in linking these projects to crypto-activities, which can give users more control and allow them to earn money.

This is known as the Web3 metaverse, a metaverse built on blockchains and includes art galleries launching NFTs, games and casinos where players earn tokens, digital advertising billboards, and artist shows entirely in the virtual world.

The increased interest in the metaverse has also been seen in crypto-related assets, which have appreciated considerably.

Some assets that are drawing attention in 2022 are Axie Infinity (AXS), a token from the game of the same name that has jumped nearly 24,000% in less than a year.

The metaverse is a promising new space with many opportunities.

Read on and see what metaverse is and how to invest in the virtual world to make money in the real world.

What is a Metaverse?

The term metaverse refers to different virtual environments in which people can play games, build things, socialize, work, and even trade and earn crypto-actives.

It is a combination of various elements of technology, including virtual reality, augmented reality, and video.

As the metaverse expands, it will offer an alternative world for people to coexist in, take on new identities, look as they wish, and perform activities possible only within this universe.

Supporters imagine their users working, connecting with friends, going to concerts, conferences and virtual travel all within the metaverse.

The term “metaverse” was originally used by author Neal Stephenson in his science fiction book “Snow Crash,” published in 1992, in which he imagined realistic avatars standing in 3D buildings and other virtual reality environments.

How does the metaverse work?

The term metaverse covers a wide variety of virtual realities, from workplace tools to games and community platforms.

This “parallel world” will be created from a variety of technologies, such as virtual reality, augmented reality, artificial intelligence and cryptocurrencies, all to transport the user into immersive, interactive experiences with a high degree of realism.

“You can think of the metaverse as a materialized internet, where instead of just seeing the content, you’re inside it,” Mark Zuckerberg explained in an interview.

For the owner of Meta (FBOK34), formerly Facebook, people would wear glasses to view digital items in the real world and “access” the metaverse at any time.

But you don’t even have to go that far. Variations of the metaverse have been around for years, but so far they have been closed worlds.

Metaverse enthusiasts envision a virtual reality in which the user could move freely between different digital worlds.

They could even have a single virtual identity, in the form of an avatar, and would pay for products and services using a universally accepted cryptocurrency.

Many of the new metaverse platforms are being built on blockchain technology, using cryptocurrencies and non-fungible tokens (NFTs).

In this way, a new type of decentralized digital asset is being built, acquired, and monetized.

Platforms such as Decentraland and The Sandbox, for example, already allow people to buy virtual plots of land and build their own environments.

What are the benefits of the metaverse?

The great advantage of the metaverse is the possibility of creating experiences in the virtual world, where people can interact with friends, watch movies, fashion shows, meet in offices, buy clothes, land, and other products and services.

The metaverse will also enable new experiences, a place where people can even take on new identities, making room for new practices, sociological routines and mentalities.

Another benefit that comes associated with this new virtual universe is the possibility of earning tokens in the real world, in addition to trading, sales and advertising within the metaverse.

For crypto-active manager Grayscale, the metaverse has the potential to become a $1 trillion annual revenue opportunity across the worlds of advertising, digital events, e-commerce, and hardware.

How to invest in the Metaverse?

Cryptocurrencies that offer a value for Web 3.0 infrastructure are among analysts’ top bets for making money with metaverse.

It is possible to invest directly in a specific metaverse by buying its governance currency or core NFT assets.

There are several virtual world games where there is a currency and internal economy, as well as sales of space, accessories, clothing for avatars, and even paid roles for players.

In blockchain-based metaverse projects it is possible to earn coins and other assets that can be exchanged for other digital goods and real-world money.

The metaverse is seen as the next big investment theme, even some stock sectors are already benefiting.

So another way to get exposure to the metaverse is to buy bonds, mutual funds, ETFs, and stocks of companies that are developing the technology.

Here are the main assets to make money with metaverse

Among the projects in the metaverse that have stood out strongly and had strong appreciation of their digital currencies are:

Another way to invest crypto-actives in the metaverse is by buying NFTs, i.e. other assets traded within this universe.

On Decentraland, for example, users can trade NFT artworks, charge admission to a virtual exhibition or concert, and earn money by trading land.

At Roblox, users can make money by charging other users for access to the games they create.

ETF funds have already joined the metaverse trend with portfolios with positions in assets involved in the technology.

By investing in global companies that are actively involved in the Metaverse, the product offers investors exposure to this new market.

On its blade are companies that can provide computing power, networking, virtual platforms, cybersecurity, chips, identity services, and other technologies.

Investors can also buy Grayscale Decentraland Trust, the first security with exposure to the MANA token, avoiding the challenges of buying, storing and storing the cryptocurrency.

With the advancement of technology and greater investor interest, the options for metaverse mutual funds will certainly increase.

One way to invest in metaverse is by buying shares of companies involved in the development of the technology, as many companies are creating strategies to enter this market.

Meta (FBOK34), formerly Facebook, is a good example of this. The company has already been investing in technologies associated with this space to create its own virtual world.

According to Seeking Alpha, the giant has 20% of its entire workforce engaged in the Reality Lab division to develop virtual and augmented reality technologies.

Mark Zuckerberg has already been showing interest in the metaverse for almost a decade, when in 2014 he announced the purchase of Oculus VR, the company responsible for the Oculus Rift virtual reality glasses.

Another company already inserted in this universe is Epic Games (EPOR), developer of the game “Fortnite” that offers users several experiences, such as gathering a group of friends to watch movies, creating an island with its own rules and joining other players in a survival battle.

However, other companies are eyeing the Metaverse and plan to play a role in its growth.

The video game platform Roblox Corporation (R2BL34) has spoken openly about its vision for the metaverse.

It envisions the metaverse as a place where “people can come together in millions of 3D experiences to learn, work, play, create, and socialize.”

Roblox aims to provide users and developers with ways to create digital worlds. Its CEO also talked about future purchases and conducting business on the platform, which has its own virtual economy powered by its Robux currency.

The computer chip maker has built its Omniverse platform to connect 3D worlds into a shared virtual universe.

Another company in this area is Qualcomm (QCOM34) which provides chips for VR devices.

Unity Software (U2ST34), which develops software used to design video games, is another that could sell tools or technology used to build the metaverse

The company still owns Xbox and the world-building game Minecraft.

This year, it unveiled its first augmented reality glasses.

Sony (SNEC34), meanwhile, is betting on its PlayStation VR headset, and has also made a $250 million investment in Epic Games to foster technology development.

Alphabet (GOGL34), Google’s parent company, has a big lead in the metaverse, but is still working cautiously.

Most of the projects are focused on augmented reality, although it has some in virtual reality as well.

The company is working on making Google Maps and YouTube work in VR and AR environments, as well as Google Earth VR for Oculus Rift users to explore virtually anywhere in the world, and improvements to Google Lens.

Although Apple (AAPL34) has not spoken out, it has the technology to become a giant in the metaverse.

So much so that popular Apple tracking site MacRumors speculates that the company has hundreds of people quietly working on various products, including an AR and VR compatible headset and AR glasses.

E-commerce giant Amazon (AMZO34) has several media offerings, is also seen as a potential player in the metaverse.

Cloud software company Autodesk (A1UT34) makes programs used by architects and engineers to design and create buildings and products. Its software is also used to build virtual worlds for gaming and entertainment.

Is it worth investing in the metaverse?

The big tech companies are betting on the metaverse. Meanwhile, online games like Fortnite, Minecraft and Roblox have already become phenomena.

Blockchain technology with cryptocurrencies and non-fungible tokens (NFTs) make it easier to buy and sell things within the metaverse, opening up commercial opportunities.

Most importantly, these tokens also make it possible to make money.

The big bet is that the metaverse has the potential to revolutionize our lifestyle and communication.

Although it is still an up-and-coming tool, which may or may not establish itself prominently in the market, it is possible to make an estimate from the valuation of the leading companies creating technologies for metaverses.

Morgan Stanley is also betting on the metaverse as the next big investment and says that many stocks are already benefiting.

The metaverse should be closely watched by investors. There are still many things to happen and many investment opportunities.

In this case, the same advice applies to all investments. Invest according to your investor profile and have a diversified portfolio.