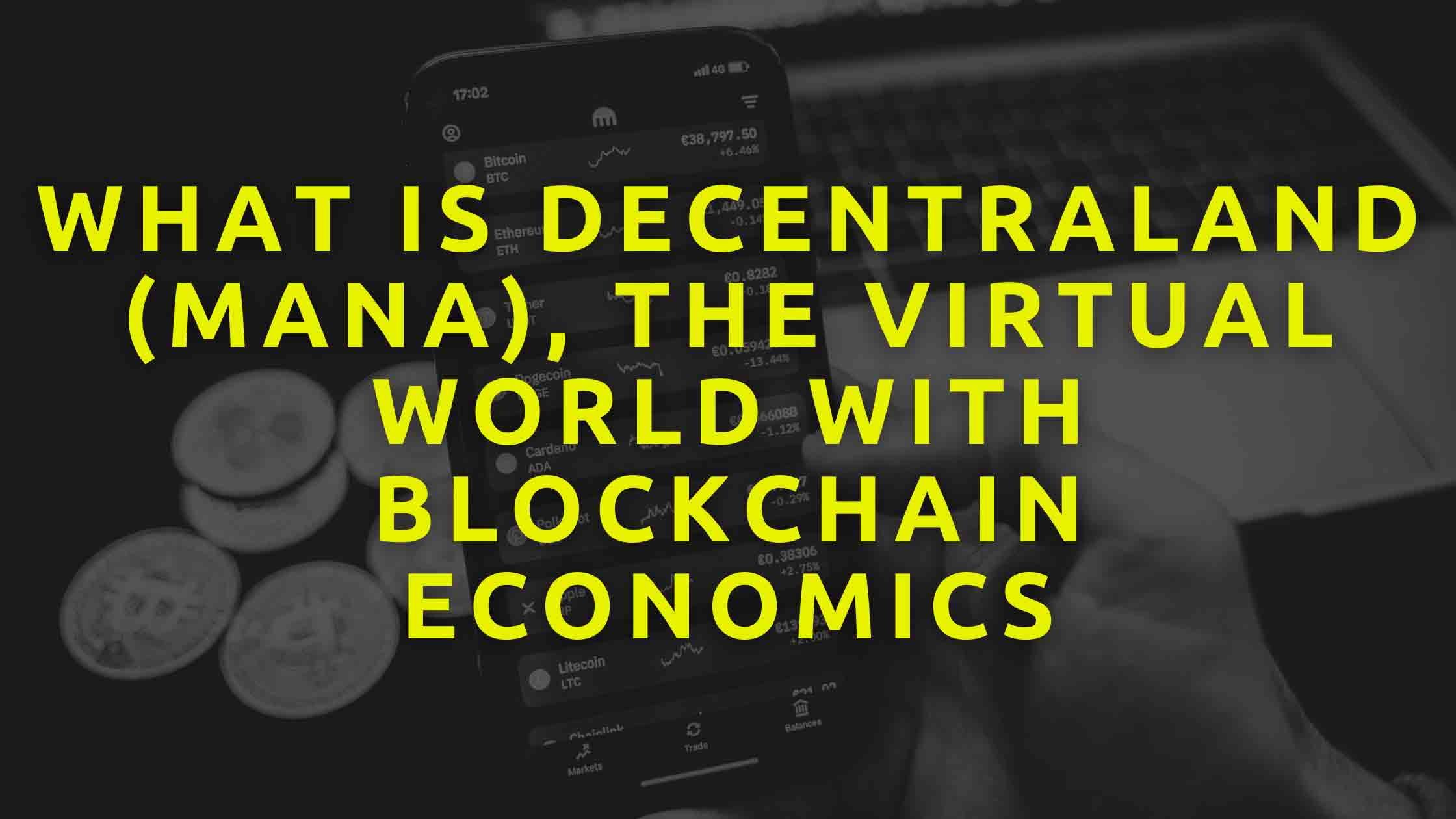 The metaverse race is generating gains for Decentraland’s MANA token.

Decentraland (MANA) one of the leading representatives of the metaverse tied to blockchain technology. As virtual universes come to life, their tokens are going up in the market.

Decentraland users can buy and sell digital goods while exploring, interacting and playing within this virtual world.

This is the first fully decentralized virtual world owned by its users.

Since October 2022, when Facebook changed its name to “Meta”, interest in the metaverse has increased and along with it the price of assets related to it.

The price of MANA, Decentraland’s token recorded a triple-digit jump within a few days.

Soon after, a virtual land in the Decentraland metaverse was sold for a record $2.4 million.

This is seen as just a sample of the economic growth potential of these new virtual spaces.

To not be left out of this new big investment, learn more about its main representative, Decentreland, and how to participate in this virtual revolution.

What is Decentraland (MANA)?

Decentraland is a decentralized virtual reality platform built on the Ethereum blockchain that allows users to create, experience, and monetize their content and applications.

In this 3D world it is possible to buy and sell land in the form of NFT (non-fungible tokens), make payments, and have an online life in a metaverse that mimics reality.

This is the first digital platform where players have full control.

MANA is the platform’s native cryptocurrency used to pay for virtual goods and services and to buy LAND, which is a virtual portion of the platform where you can create worlds.

Who are the founders of Decentraland?

The Decentraland Foundation is the organization behind the development of the Decentraland software, which was founded by Ariel Meilich and Esteban Ordano.

Both have stepped away from the main positions in the project, but continue as advisors.

Ariel Meilich was project leader from 2017 to 2020. Besides Decentraland he has founded several other startups, including an online translation agency and a CRM platform.

He has also worked as an analyst at Charles River Ventures, a Silicon Valley investment fund.

Esteban Ordano is the former chief technology officer at Decentraland and has experience in the cryptocurrency market, working as a software engineer at BitPay, Inc. as an advisor to Matic Network.

The Decentraland team held an initial coin offering (ICO) in 2017, raising about $26 million at the time.

The Foundation owns 20% of the initial supply of tokens, the intellectual property rights, and maintains the Decentraland website.

Before launching its platform, Decentraland launched a decentralized autonomous organization (DAO) to pass management of the project to its users.

The virtual world launched its closed beta in 2019, opening to the public in February 2020.

How does Decentraland work?

Decentraland is an online environment that combines virtual reality with blockchain technology.

To support the operations and functions of the ecosystem, its structure is divided into three different layers:

Decentraland enables a wide variety of 3D models where users can create and host applications, games, and interactive content.

Any user with MANA staking can create new proposals or vote on others.

What is LAND in Decentraland?

In Decentraland, the spaces you interact with are LAND, non-fungible digital assets (NFTs) that you acquire in-game.

In total, the Decentraland world is divided into 90,601 individual LAND plots, with each being represented by an ERC-721 non-fungible token.

Each LAND is 16m x 16m and can be found at a specific coordinate in the Metaverse.

Once you own a batch of LAND, you are free to do whatever you want with it.

Similar groupings in LAND are called districts. These were generated through individual crowdsales for MANA tokens, and the LAND parcels in these districts cannot be traded.

In addition to being a creative venue, many Decentraland users currently monetize their LAND through leasing, advertising, and paid experiences.

Similarly, other users generate income by creating and selling items on the Decentraland marketplace with MANA tokens.

Decentraland a decentralized virtual reality system that allows interaction and communication between users.

Since the platform’s creation, developers have kept in mind its potential for new use cases in communities based on blockchain technology.

With Decentraland’s scripting language, users can create applications and scenarios when developing their land purchased with MANA.

In addition to experiencing a more interactive way to socialize with their friends, Decentraland attracts users with similar interests, providing for the growth of their districts.

As with most games that contain blockchain economies, there is the opportunity to make money, either through advertising or speculating with LAND lots.

MANA is the native token of the system and can be used to buy LAND and virtual assets that are developed and sold by Decentraland users.

It is also used in the governance of the system.

LAND, on the other hand, represents ownership of a portion of the metaverse ecosystem.

The functionalities are leveraged through the Ethereum blockchain.

MANA is Decentraland’s native cryptocurrency created as a governance token within the platform and for buying and selling land within it.

In other words, MANA token holders have the right to participate in voting in Decentraland’s DAO system, as well as being used to buy LAND lots and pay for local goods and services.

The MANA token was created following Ethereum’s ERC-20 standard, and can be easily integrated into DeFi , DEX and other Ethereum dApps.

The project was initially launched with a total supply of 2.8 billion MANA tokens, but this was reduced by burning tokens during LAND auctions.

There are also a number of other flaring mechanisms in place to further reduce the circulating supply of MANA, including a 2.5% flaring of MANA from Decentraland marketplace transactions.

The amount of tokens currently in circulation is 1.82 billion MANA.

LAND is a non-fungible token (NFT) that follows the ERC-721 standard and represents the land lots owned by players in the community.

Thus, each plot of land has its own unique characteristics.

The Decentraland team originally sold each batch of LAND tokens for 1000 MANA. Now that there is a secondary market, however, prices vary.

However, LAND does not need to be locked into DAO and each LAND token provides two thousand votes to the owner.

At the moment, MANA can be traded with Bitcoin (BTC), Tether (USDT) and Ethereum (ETH) and various fiat currencies.

Is MANA worth it?

Decentraland is a project that is part of the Metaverse revolution. It is perhaps the first and most important representative of virtual reality platforms integrated into blockchain technology.

The idea behind these metaverses is just beginning.

Decentraland appears as a promising game and consequently its native cryptocurrency.

However, one must keep up with the evolution of blockchain metaverses. This new investment, besides creating a parallel virtual universe, also makes players earn money.