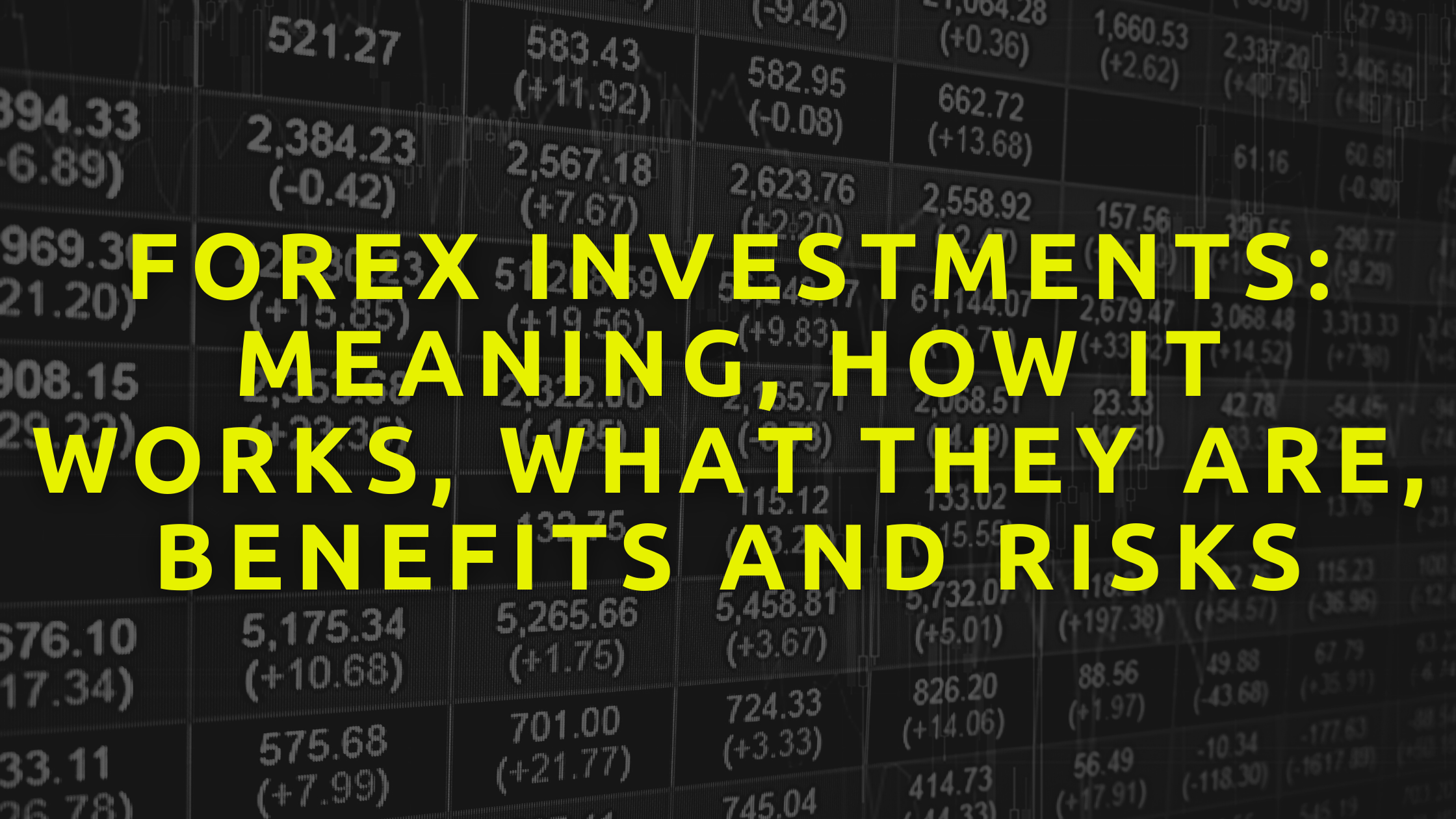 Nowadays, more and more people decide to approach the world of trading with the specific objective of turning to the Forex market. The average daily volume of this market is over 5 trillion dollars, that’s why understanding how it works as well as its advantages and risks can help to obtain results more in line with one’s expectations. We are going to see in detail what Forex investments are and how they actually work.

What are Forex Investments: Definition and Meaning

To fully understand what Forex investments are, the essential point to start from is the etymology of the term. Forex, in fact, is a cross between two words, Foreign Exchange, which indicates the market for the exchange of monetary currencies.

A clarifying example will help us to understand the topic more fully. Each country has its own currency, in the Eurozone for example we have the Euro, as well as in much of the American territory there is the Dollar. And obviously each currency can be exchanged with another at the cost of a symbolic exchange rate. The fundamental factor to be focused on, however, is the one related to the fluctuating nature of currencies. In fact, there are various factors that can contribute to vary even slightly their value and the relative market trend.

It is precisely by exploiting these small and large variations that Forex investments are carried out with the precise aim of obtaining ROI (Return On Investment). When different currencies are associated with each other they are called currency pairs and as such are traded on the Forex Exchange Market.

The fundamental peculiarity that should be emphasized about the Forex is that it is an over the counter market, that is, operating 24 hours a day. Certainly among the notations to be noted is the fact that its operation does not take place on the stock exchange, unlike other types of markets such as commodities or stocks.

It has been said before that the functioning of Forex investments is essentially based on the exchange of various quantities of currencies in order to obtain profits, but it is necessary to specify that the largest part of its operation is speculation.

Each currency exchange has its own volatility and as such, currency pairs cannot help but show the same characteristic. And so the interest of various traders is to exploit the volatility of the market trend in order to obtain ROI. In order to do so, they turn to specific companies specialized in trading currency pairs.

What Influences the Forex Market

What are the factors that most influence the Forex market? Above all one cannot fail to mention the interest rate. Obviously, the higher the interest rate of a given currency, the higher its value will be due to the convenience of owning it. Continuing on, we can mention the inflation rate. Although it is not a mathematically precise association, usually the more the inflation rate rises, the more possibilities there are for an increase in interest rates.

The rate of GDP growth is another factor of primary importance in this discussion. A phase of economic growth inevitably favors an increase in the value of a given currency and this process, similarly to the previous one, could cause an increase in interest rates.

We have limited ourselves to presenting the indicators most responsible in the process of influencing Forex, in addition to those just mentioned there are also many others, including for example the unemployment rate, the consumer price index, the consumer confidence index, etc.

Majors are defined as the most traded currency pairs and, among other things, are those that currently represent about 90% of all Forex trades.

Specifically these pairs are seven, we have:

Where to Invest in Forex

One of the factors that most contributes to the success of the trader’s trading operations is the choice of platform to be used to invest in Forex. These platforms are called brokers and currently the market has an incredible variety of them.

Obviously each broker has its own functional characteristics and strengths, but if we wanted to indicate the main requirements that should be sought in your choice these would be: the possession of a European license, the presence of a service and customer support fast and timely, an intuitive initial interface and the possibility of using a demo account through which to practice in various operations without running the risk of squandering the initial funds.

There are not so many online brokers who possess a globally recognized operational excellence and the possession of the requirements mentioned above, but the name of eToro definitely stands out. eToro is one of the most renowned and used brokers in the world, in Italy it is the one that can boast the largest number of registered users. It is characterized by features designed specifically to facilitate the trader in the performance of its various trades, in addition to this is recognized for the security it offers and then presents itself as one of those realities to be trusted.

Benefits and Risks: Is it worth investing in Forex?

Obviously, the Forex market, just as it is configured, has many advantages, including the ability to trade independently and at any time, the possibility of using the famous leverage, the high level of liquidity and much more. However, it is not without risk and it is only by taking a broader view that it is possible to determine whether the Forex market is more or less suitable for your needs as a trader.

The biggest risks of Forex can be found in the lack of financial planning, in the overestimation of one’s skills and in the high volatility of some currency pairs. It is no coincidence that about 90% of small savers in the medium to long term often get losses of the entire capital, which is why it is essential to continuous and updated training.

In conclusion, is it worth investing in Forex? Yes, as long as you know how to choose the right platform on which to trade, you are aware of your level of competence in the sector and you carry out a healthy and foresighted financial planning in order to obtain the best possible results.