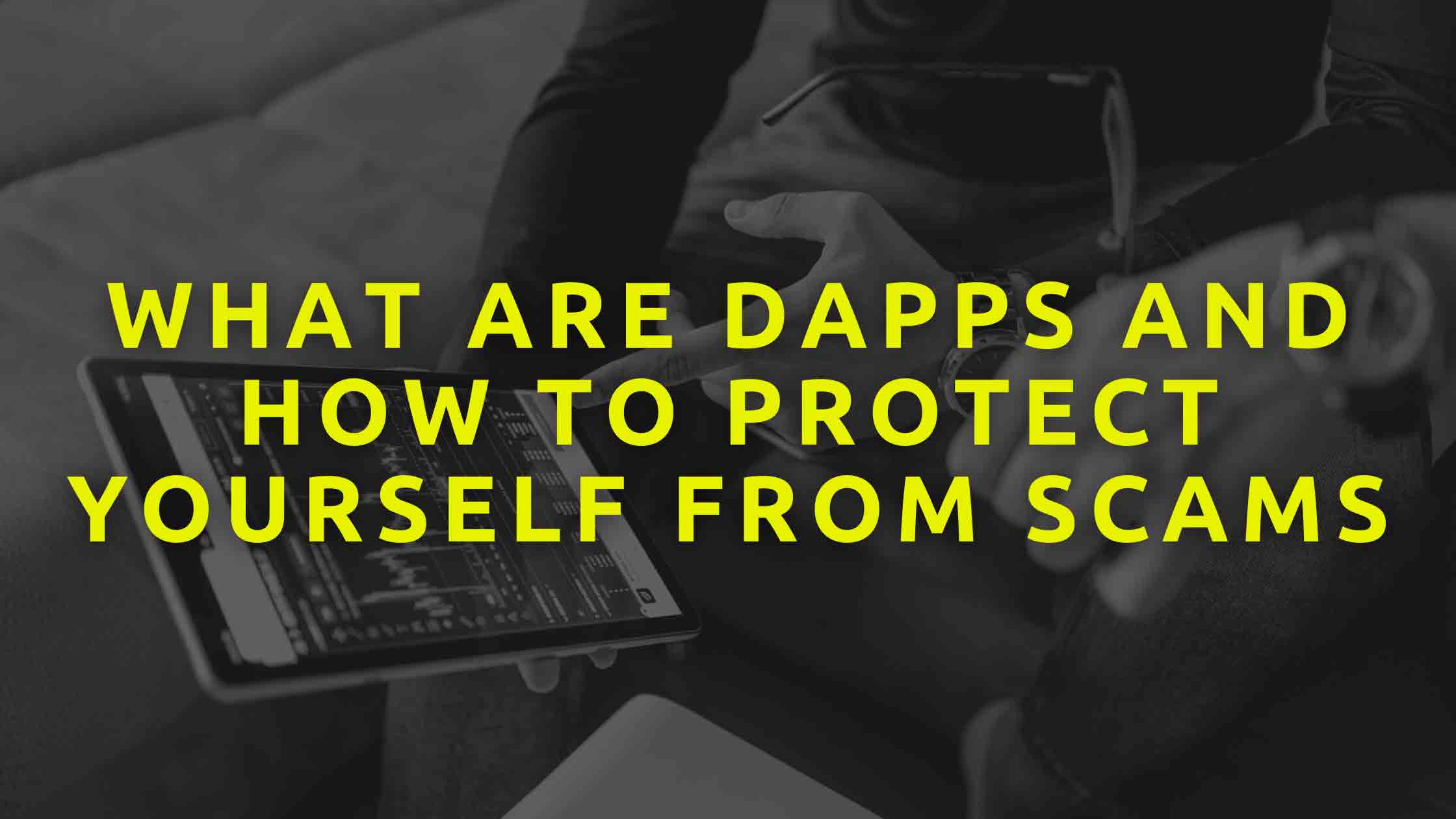 The growth of decentralized protocols is positive for the market, but opens the door to new financial crimes. Here’s how to protect yourself.

How to protect yourself from scams when trading on DApps?

As more people become interested in decentralized apps, scammers are finding ways to cause harm to investors.

The cryptoactive market has been expanding since the development of Bitcoin in 2008. In recent times two new solutions are in the spotlight: DeFi and DApps.

The term “Decentralized Application” (DApp) are decentralized applications that operate without relying on a central authority.

Developed on blockchain technology, these programs are used in the for gaming applications, web browsers, identity storage and verification, education, financial use (DeFi), and others.

DApps first appeared on the Ethereum network and have since expanded to other networks that use smart contracts to automate transactions, such as Binance Smart Chain, Solana, and Avalanche

The DApp ecosystem has been expanding across a wide range of industries and various protocols have increased their market value.

With more money in circulation, so have scams, from hacks to carpet pulling.

Even though financial crimes and scams have grown to a lesser extent than the DApps ecosystem, these cases can cause investor insecurity.

More than $10 billion was stolen from DeFi protocols in 2022, according to risk management agency Elliptic. This represents a 600% growth from 2020.

While scams do exist, there are ways to protect yourself.

Here’s what decentralized apps are, their importance, and how to protect yourself from scams when trading on DApps.

What are decentralized applications (dApps)?

Decentralized applications (dApps) are digital programs that run on smart contracts on a blockchain network.

Blockchain technology allows applications to be transparent, immutable, and decentralized, i.e. not dependent on a central authority.

DApps can be developed for a range of purposes, including gaming, file-sharing networks, and social media.

However, their most discussed use is in financial services, which is given the name decentralized finance (DeFi).

Thus, we can summarize a DApp as an open source application hosted on blockchain that rewards users with tokens.

According to “The General Theory of Decentralized Apps,” published by David Johnston in 2014, there are three types of dapps.

Most traditional programs are centralized, that is, they are controlled by a central entity responsible for the application and its operation.

By contrast, DApps run on a decentralized, open-source network with no particular authority in control.

Changes are only executed after consensus is reached among the participants, and the protocols and information are stored on blockchain.

Most DApps protocols are built, protected, and incentivized through a Proof of Work (PoW) or Proof of Participation (PoS) consensus mechanism.

Typically they are designed to give users an incentive via tokens.

Decentralized apps can do everything an ordinary program does, with the advantage that they use blockchain technology that allows them to execute without a central authority.

In addition, they are faster, more accessible, and more efficient at processing large volumes of data.

The main advantages of DApps are:

Their decentralized nature provides a higher level of security as the information is distributed in a shared registry.

This way, a malicious hacker needs access to all the machines connected to the network to carry out an attack.

All transactions performed on a blockchain can be easily verified.

In the ecosystem, community involvement is encouraged and everyone can contribute to the management of a DApp and be rewarded for it.

As decentralized apps, they have the ability to protect users’ privacy. Users do not have to submit their personal information to use what the application offers.

DApps can be deployed in a variety of industries, including finance, gaming, social media, online shopping, and others.

The use of DApps is still in the early stages and therefore it is common for some issues and doubts to arise regarding their effectiveness as well as acceptance by more traditional users.

Here are the main disadvantages of decentralized applications:

Getting people to make the transition to DApps will require patience and effort from developers to create an end-user experience and level of performance that rivals already popular and established programs.

While the difficulty of code changes may bring more security, it is also a limitation, since a new DApp will likely need continual changes to improve or fix bugs.

How to protect yourself from scams when trading in DApps

Major hacks this year involved DApps and DeFi projects. There was more than $10 billion lost in theft and fraud, a report by blockchain analytics firm Elliptic showed.

The main problem is not the fact that it is built on a relatively new technology, but rather, the human component.

Although decentralized applications are designed to be independent, the creators of the protocol must be trusted.

Human failures can come from errors in design or the implementation of imperfect code that can be exploited by malicious people.

But there are also cases of intentional “mistakes,” in which developers launch fraudulent or misleading projects so that funds can be easily diverted.

Even with so many scams and traps, it is possible to identify some common patterns that separate legitimate DApps projects from the deceptive ones.

Here are some tips on how to protect yourself:

Whether it’s a DApp, DeFi or otherwise, you should always do your research before investing in any project.

Examine it carefully in order to determine if it is legitimate and if, in the long run, it has the potential to earn you a good return.

Start by examining the project or token’s website. Is it complete or was it developed in just a few hours?

Read the whitepaper, the material should clearly explain the project’s benefits, market challenges, and how they plan to address them.

Who are your developers or founders? Do they give their names? Do they have experience with such projects?

Where is the token available for purchase? Is it a trusted place, a cryptocurrency exchange?

While these are not the only indicators that a project is legitimate or not, they can reveal more about details that you were not aware of at first and help you decide whether to invest or not.

What is the goal of the project?

If on the one hand there are many interesting innovations in the DApps universe, on the other there are many projects that just ride on the hype of the industry, without bringing anything new.

So always ask yourself if the project is trying to do something innovative. Is it trying to contribute to the new digital economy?

How does it differ from its competitors? Is it feasible and does it have value?

With simple and conscious questions you can already eliminate some scams.

Is the project in constant development?

Another point to be observed to protect yourself from scams is the development activity.

Are the developers involved with the project and working continuously to improve it?

If you know a bit about coding, you can take a look at the code yourself since it is open source.

Check out the smart contract

DApps projects are based on smart contracts that execute a set of instructions on the blockchain.

While they can be quite technical, it is worth checking its authenticity if it is public or asking someone who knows the space to do so.

If smart contracts are private, make it a rule to only invest if the team behind them is fully verified, trusted, and has a proven track record.

If there are any problems with the code, there may be weaknesses in the project, as happened with the DeFi Poly Network platform.

The hacker exploited a problem with the network’s coding and stole the funds in what became known as one of the biggest cryptocurrency thefts of all time.

So look for projects that take security precautions and are well audited.

Something widely used with smart contracts is an audit. They aim to find out if there are problems in the development of a project and make sure that the code is secure.

Although they are an essential part, some developers deploy their code without any audits.

If you are an ordinary trader, who has not mastered programming languages, it is preferable not to invest in projects that have not had their smart contracts audited.

But don’t rely only on auditing. Although it is necessary, it does not mean total security.

Even if the project is audited, it is still possible that something may go unnoticed.

Therefore, always be aware of the risks and invest only what you can afford to lose.

Who are the founders?

Projects with anonymous founders can pose an additional risk to consider.

Although the cryptoactive world is based on pseudonymity, responsible project developers will not see much problem in exposing their identity.

Scammers, on the other hand, will not want to have their reputation at stake. If they remain anonymous, there is a good chance that they will not be held accountable.

This is not to say that all projects led by anonymous teams are bad.

Bitcoin is an example of this. We will probably never know the identity of Satoshi Nakamoto, but the project has proven itself legitimate.

Still, the anonymity of the team is something to look into.

How are the tokens distributed?

Before investing in a DApp or DeFi project, check how tokens are distributed.

A significant allocation of tokens by the founder can be considered a warning sign.

One way for a scammer to make money is to inflate the price of the token, and then dump it on the market, causing its price to fall.

Consider also the way tokens are distributed to the public.

Is it done through an exclusive pre-sale, an initial coin offering (ICO), an initial exchange offer (IEO)?

The token distribution model should be clear to everyone.

It is extremely important that your private keys remain secure.

There are different portfolio options available to protect your cryptoactive investments.

In short, to protect yourself from scams, ask yourself if the proposition is too good to be true.

Continue learning more about the world of crypto assets, how to protect yourself, and how to make money at Binance Academy.