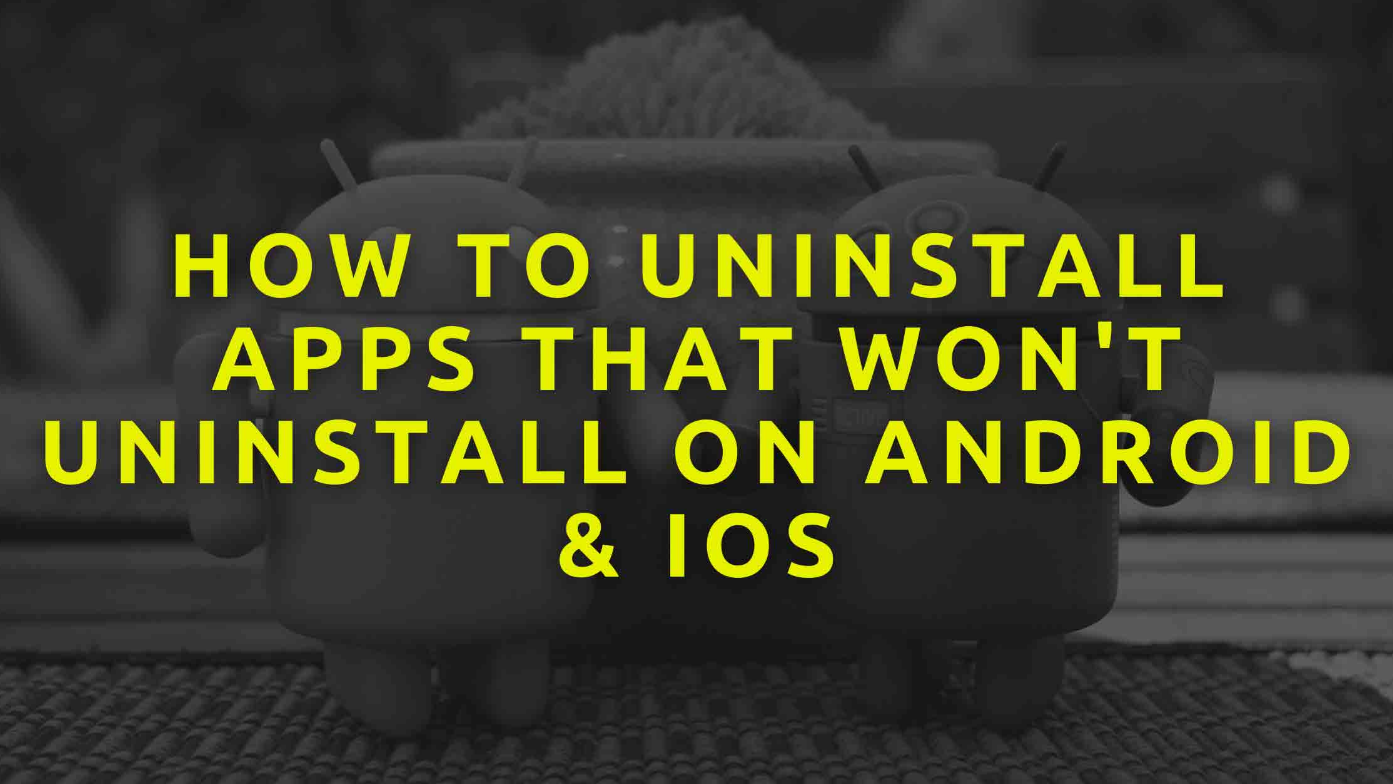 Are you trying to uninstall app from your smartphone but a strange error message prevents you from succeeding? Have you just bought a new smartphone and, to your surprise, found it full of useless apps that you can’t remove now? Don’t despair. With a bit of effort and following my advice, you should be able to solve the problem and delete even those apps that seem “unremovable” at the moment.

The problem of apps that “won’t uninstall” is quite common. It mainly affects Android terminals, where manufacturers “have fun” loading completely useless apps (called bloatware) that don’t have an option to uninstall, but also Apple’s portable devices can present similar problems, with apps that remain stuck on the download status and can neither be opened nor uninstalled, unless you take some steps that we’re going to find out together.

So let’s get down to business and see how to uninstall apps that won’t uninstall on Android and iOS using some procedures that should prove effective in most situations. I sincerely hope that they will help you too and that, by putting them into practice, you will be able to “unblock” all those apps that now seem unwilling to be deleted. Good luck.

How to uninstall apps that won’t uninstall from Android Let’s start this tutorial on how to uninstall apps that won’t uninstall from Android terminals that, as just mentioned, are the ones most affected by the problem related to apps that don’t want to know how to delete.

There are two main reasons why you can’t uninstall an app on Android: the assignment of administrator permissions to the apps you are trying to remove and, as pointed out at the beginning of this post, the limitations imposed by manufacturers on the apps they pre-install on their devices (the infamous bloatware). Let’s analyze the two situations in detail.

Some Android apps, such as anti-malware, anti-theft apps and launchers, need to get administrator permissions to work properly. Once they have these permissions, they can access features of the operating system that they wouldn’t normally have access to. For example, they can control the screen lock, erase the contents of the smartphone’s memory in case of an emergency (e.g. when a smartphone is stolen and the user remotely commands it to be formatted), and more.

If you think you’re dealing with an app that can’t be uninstalled because it has administrator permissions, go to the Settings > Security menu on your Android smartphone or tablet, select Device Administrators and uncheck the icon of the app you want to delete.

In the screen that pops up, confirm by clicking on the Deactivate button at the bottom right, and you should be able to uninstall the app.

To uninstall an app from Android – you should already know this – all you have to do is keep your finger pressed on its icon and drag it to the trash can that appears at the top or, alternatively, go to the Settings > Apps menu, select the app’s icon and click the Uninstall button

When you first turned on your smartphone (or tablet) did you find it chock full of useless apps? Unfortunately, it happens a lot. Some manufacturers, including the most famous ones, like to deeply customize Android using alternative launchers and mostly useless apps that come pre-installed on the devices and are practically impossible to uninstall.

Another case where you can find a lot of useless apps installed on an Android terminal is that of branded smartphones. What is this all about? I’ll explain it right now. In phone stores, electronics stores and on the Internet you can easily find smartphones at a discounted price compared to the list price because they are branded by a telecom operator (e.g. TIM or Wind). Phones sold under this formula include various apps and customizations (wallpapers, boot screens, etc.) that are tied to a single operator and are extremely difficult to remove. Fortunately, these are not “locked” smartphones: they can be used with any operator’s SIM card, but they include apps, wallpapers and other content customized by an operator that can be particularly annoying (especially if you decide to use a SIM card from a different operator than the one that branded the device).

How do you remove bloatware and delete all the useless apps that are pre-installed on Android devices? The answer is one, but slightly complex: root the device and install an application capable of uninstalling bloatware in a forced manner.

In case you haven’t heard of it before, rooting is a procedure by which you bypass the normal Android restrictions – you get, in fact, root permissions – and can therefore perform operations that normally would not be allowed, such as changing advanced hardware parameters (e.g. processor frequency), forcibly moving applications to SD and forcibly removing default and/or system applications (the feature that interests you right now).

Unfortunately, rooting requires a lengthy procedure that is not particularly complex but quite tedious and changes from device to device.

After rooting on Android you can take action. How? By installing Titanium Backup: a very popular app for backing up apps (and related data) that allows you, among other things, to force the deletion of system apps and default apps that come pre-installed on Android terminals. It’s free. There’s also a paid Pro version with advanced features, such as creating backups of multiple versions of the same app, but I’d say you don’t need it right now.

I’d like to point out one very important thing: Titanium Backup is an extremely powerful application and should be used with caution. Before proceeding with the deletion of any type of app, be sure to save a backup copy (you can take advantage of the special function included in Titanium) and, if possible, make a full system backup (Nandroid).

Everything clear so far? Good, then I guess we can proceed. First, start Titanium Backup, grant it root permissions by clicking on the Grant button and answer OK to all the warnings that are shown to you in order to access its main screen.

Now, select the Backup/Restore tab at the top, locate the app you want to remove and backup it by first clicking on its name and then on the BACKUP! button on the screen that opens.

When the backup is complete, tap on the app’s name again and tap first on the UNINSTALL! button and then on Yes. Within a few seconds the selected app should be removed from your device. If you still see its icon in the drawer, restart your smartphone or tablet.

If you have second thoughts, you can reinstall the previously deleted app by going back to Titanium Backup’s Backup/Restore tab, selecting the app in question and first clicking on the RESTORE button and then on App+Data (in order to restore the app and its data) and Install. In order for the restore to be successful, you have to turn on unknown origin support in the Settings > Android Security menu.

I’ll repeat once again what I said before: uninstalling default and system apps can be very risky, it can seriously compromise the functioning of your system. Think carefully before proceeding. Also, never forget to backup your apps, data and operating system. I do not take any responsibility for any problems that may occur on your smartphone as a result of careless use of apps like Titanium Backup.

To figure out which apps are system apps, you can use Titanium Backup’s guidance, which marks system apps in red, system apps that contain “useful data” in green, and user apps in white (those that you can safely delete because they’re not part of the operating system).

How to uninstall apps that won’t uninstall from iOS Unlike Android terminals, iOS devices (i.e. iPhone and iPad), are never sold with apps other than the “stock” ones provided by Apple, i.e. Safari, Mail, Notes, Weather etc. Therefore, the problems of “apps that won’t uninstall” only concern issues related to downloading apps from the App Store. More specifically, it may happen that while downloading an app, it remains “frozen” in the download state (i.e. with the gray icon) and can neither be started nor removed using the classic uninstall procedure for iOS apps (i.e. by holding your finger on it, selecting the Reorganize apps item from the menu that opens and pressing the x that appears in the upper left corner).

To solve this problem, you can implement several solutions, all of which are quite simple and straightforward.