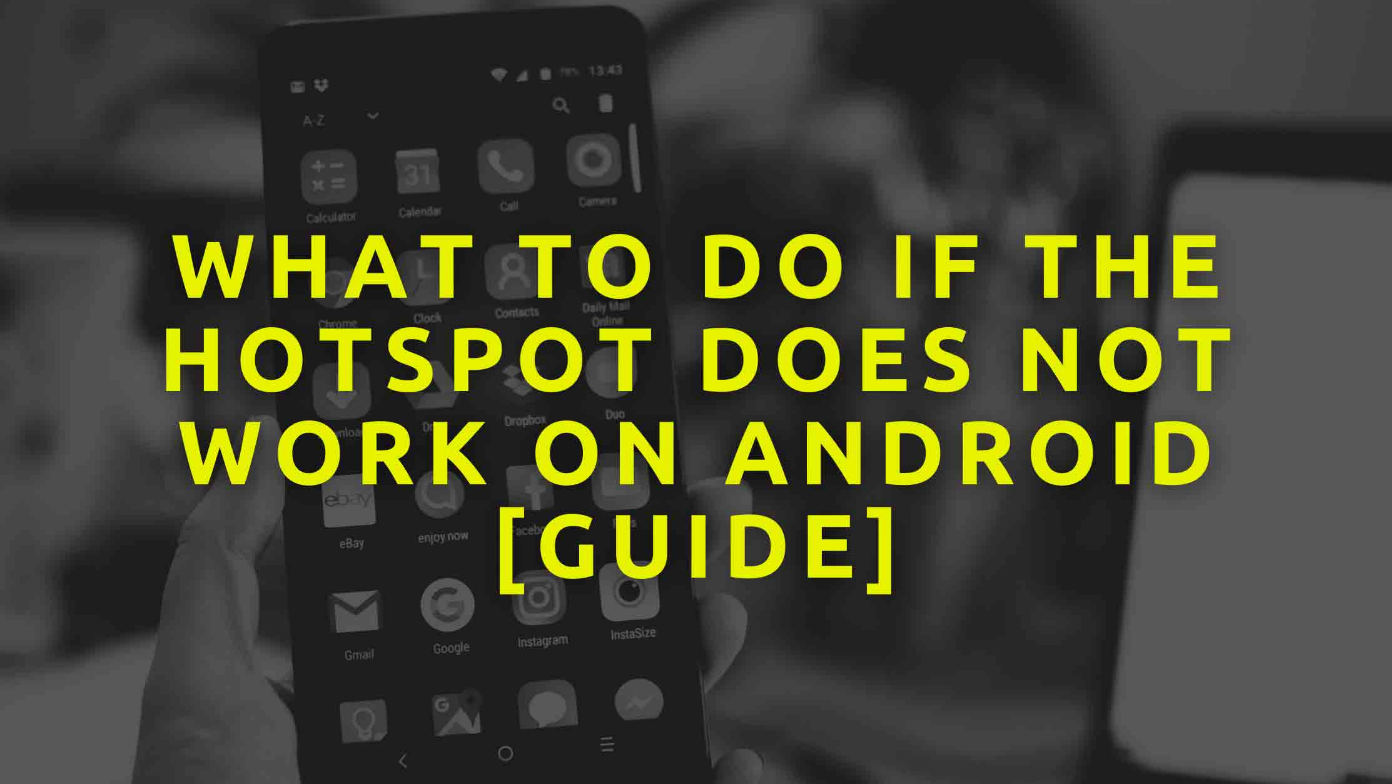 For many people it is normal to use the smartphone hotspot as a router, so you can surf using the phone’s connection and without the need for cables in between. The hotspot in fact makes available the data connection of the smartphone with other devices through a wireless connection, thus transforming the phone into a router to which you can connect other devices such as computers, tablets, or other smartphones themselves. The hotspot is also widely used in cases of emergency, in fact, let’s say that you have a problem with the ADSL and you have to do something important from your PC, but you do not have the line to surf, with the hotspot you overcome this problem when you will be able to connect with your PC to the internet network of your smartphone, making use of its data connection to surf. Sometimes, however, the hotspot may not work, so in that case, how can you solve it? We have collected several solutions in this guide that will explain what to do if the hotspot does not work on Android.

More and more people, given the phone, offers richer and richer in gigs that there are for mobile devices, decide to use the phone as a router through the hotspot, so you can use your smartphone as a router and connect to it to surf with other devices, all at quite low prices, since now the offers with hundreds of GB per month are costing even less than 7 euros per month and in addition, there are also unlimited calls and texts. However, the hotspot may sometimes stop working on your Android smartphone, so how should you proceed in such a case? If you are experiencing problems with the hotspot of your smartphone, I suggest you continue reading the solutions listed below to solve the problem.

If your carrier didn’t configure the hotspot automatically when you first inserted the SIM in your phone, you’ll have to do it yourself through the APNs. You will then need to search for the hotspot configuration for your carrier and follow all the steps it indicates to enter the necessary data for configuration. Usually, if the APNs of the hotspot has to be configured manually, the data connection will not work either.

Make sure you have correctly activated the hotspot

To activate the hotspot on an Android smartphone proceed as follows:

Also make sure that if the hotspot has a password, it has been entered correctly on the computer or on any other device you need to use to connect to the hotspot. To find out the name of the password, just follow these steps:

Make sure you have enough gigs available

If you don’t have gigs available on your phone because you’ve used them up, obviously the hotspot won’t work. Check with your carrier’s app or website to see if you have enough gigs available to surf the web. If you notice that you’ve run out of gigs, obviously you won’t be able to surf and you won’t be able to use the hotspot. The solution, in this case, is obviously to renew your Giga offer.

Make sure there is a good signal

If you’re very far away from the phone acting as a router or if the data connection is very weak, the hotspot might give you problems and not work as it should. Make sure your smartphone has a good signal and don’t stand too far away from your phone when you have the hotspot on and connect to it.

Power saving allows an Android smartphone to save battery power, however, especially if the battery charge is very low, the system may start to act on app consumption, closing background app processes that you are not using, to limit power consumption and make the remaining battery charge last longer. Power saving mode, if active, might also interfere with the hotspot connection, which is why it would be better to disable it if you notice any malfunctions. Here’s how to proceed to turn off power saving on Android:

The hotspot can be set to not exceed a limit of data not to be consumed. By setting a data limit for the hotspot, when this limit is reached, the hotspot connection will be turned off automatically. The data usage statistics will then be reset to 0 each time it is enabled. The data limit can be set as follows:

if you use a VPN, disable it

The hotspot connection may be affected if you are using a virtual private network (VPN). If you experience problems with the hotspot on your Android smartphone, I recommend that you deactivate the VPN before activating the hotspot. Proceed as follows to disable a VPN:

Try changing the Wi-Fi band of the hotspot

The hotspot is a very useful feature as it allows you to turn an Android smartphone into a router that can be practically connected to multiple devices using the same data connection. Often the hotspot is used in emergencies to connect other devices, but some now use the hotspot normally to browse the internet for example from a PC or a tablet. If you are experiencing malfunctioning problems with your hotspot, through the solutions seen above you should be able to solve it, as they are the most common solutions that can occur in case of malfunction. Of course, a software problem with the phone that doesn’t make the hotspot work could happen, but in this case, it could probably only be solved with a reset to factory status or an OS update with the bug fixed. See you next guide.