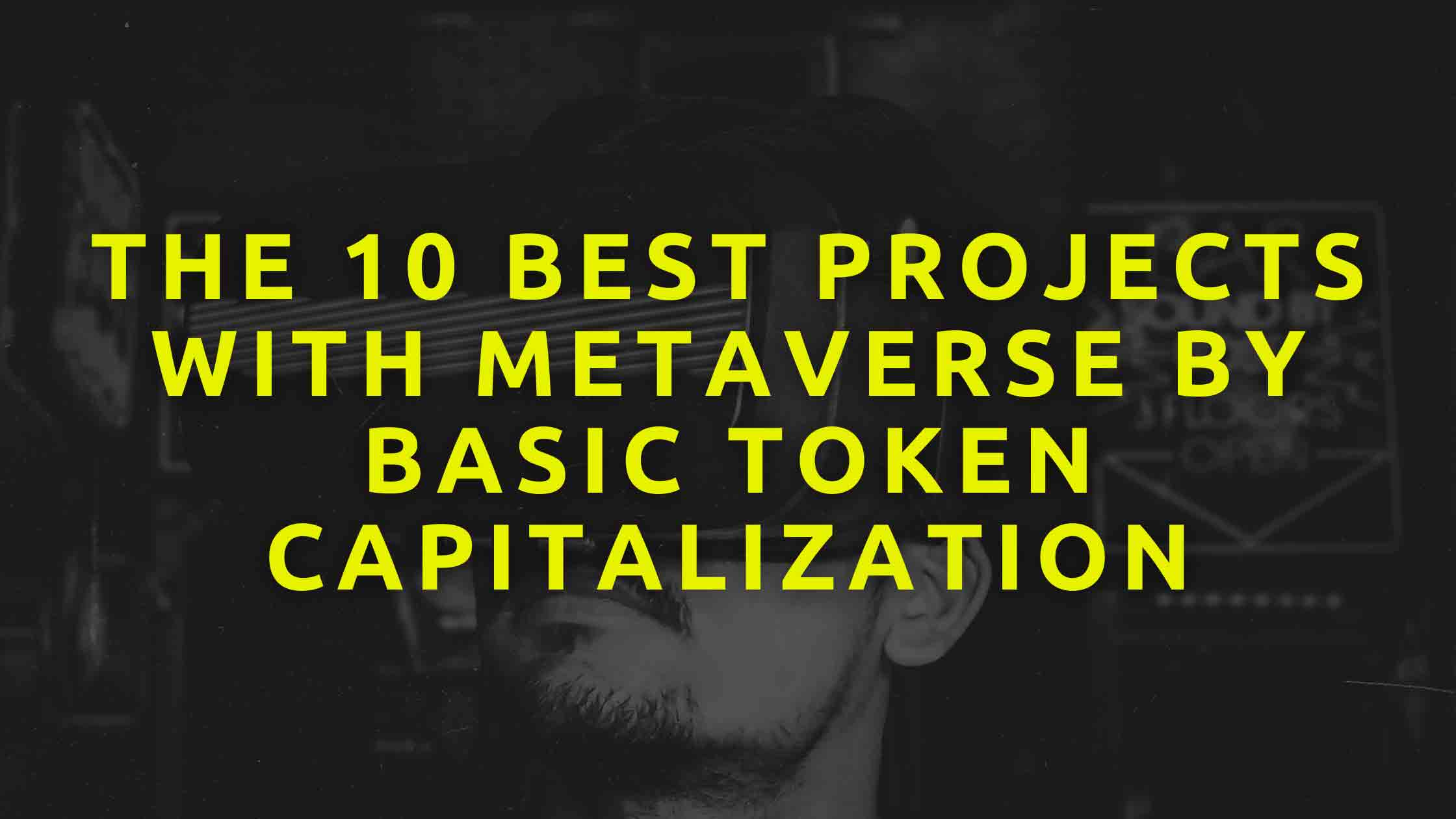 The topic of meta-villages continues to evolve. New projects are appearing and old ones are becoming even more in demand, and many investors are choosing this direction to increase their capital. In this article, digiitallife.com editorial staff collected the list of the best projects with meta universes – these sites combine valuable investment tools, monetization of game results with NFT and entertaining gameplay, and often functionality for development of decentralized game applications. The latter is also very important for the further development of the sector.

How metaverses and blockchain are related

In today’s view, a meta-universe refers to an online world where users can interact with each other, including through virtual or augmented reality interfaces. It’s like a social network, but with a more immersive experience. However, that’s not all. The meta-universe is now inextricably linked to blockchain, which makes it possible to unlock the potential of both concepts. They complement each other perfectly.

Here are the main technologies that are helping to make meta-universes better:

Cryptocurrencies. Blockchain is the basis of most cryptocurrencies (Bitcoin, Ethereum, etc.). In meta-villages, cryptocurrency assets serve the same purpose as fiat money in real life: allowing you to buy goods and services. For example, one of the most popular areas is investing in land plots in virtual worlds, and then renting them out or reselling them. We can expect a serious development of DeFi in this area (lending, borrowing, trading in meta universes).

Games. Crypto-gaming has been evolving for quite some time, from online casinos with payment and withdrawal in bitcoins, to the modern Play-to-Earn concept. Converting the gaming experience into real money is an idea that has already captivated millions of users. You can win cryptocurrency for completing tasks, activity, wins in game competitions.

NFT. Irreplaceable tokens run on a blockchain and are used to prove ownership of connected digital assets. They can be connected to absolutely anything – digital artwork, gaming items, avatars, land plots. In any of these cases, NFTs are used to prove that the owner of the token is also the legal owner of a particular object.

The best projects with metaverse

Decentraland is deservedly considered the best 3D virtual universe based on blockchain, where players can buy plots of land, build on them, communicate and trade with other players. Anyone can access Decentraland with a cryptocurrency web3 wallet that works with the Ethereum network and start exploring the virtual world. Decentraland has a MANA token, which is used as the base currency and allows you to interact with the ecosystem.

Axie Infinity is an NFT-based online game inspired by Pokémon. The world is filled with creatures called Axie. The idea is to collect and breed Axies and use them in battles to earn in-game currency. All resources obtained in the game, including pets, are presented as NFTs and are actually owned by the users. The developers strive to create an ecosystem that is primarily filled with a gaming experience and then generates revenue.

The Sandbox is a decentralized virtual game world where you can find thousands of NFTs and create your own. The game allows participants to monetize their personal gaming experience. The game ecosystem is powered by Ethereum and allows participants to share and monetize their game assets while retaining absolute ownership. It is worth noting that Sandbox is a kind of hybrid game, game engine and content sharing platform (like Steam). Therefore, it has a chance to become a prototype of the next generation of decentralized gaming platforms.

As meta-universes grow and evolve, there is a need for supporting infrastructure, including data and content management. Theta is well suited for peer-to-peer (P2P) transmission of video and other information. The project has been growing steadily since its inception, with experts believing that it is its development that underpins many directions of meta-villages. Theta actively cooperates with metacons, helping to organize concerts and other events in virtual space.

Enjin Coin is a cryptocurrency token that can be used by blockchain-based social game players to buy virtual items. It is also a store of value that can be used in the fast-growing NFT market. Users can create websites, clans, chat, and open virtual merchandise stores. In November 2022, the company formed the Efinity Metaverse Fund to support the growth of the network and ecosystem partners.

SushiSwap is a decentralized exchange that allows users to trade, accumulate returns and perform other transactions related to decentralized finance. The platform is based on the code of the Uniswap exchange and is very similar to it. The company recently announced the development of its own meta universe, against which the token has grown significantly SUSHI.

WAX is a well-known transactional blockchain ecosystem focused on NFT and gaming. It provides a secure and convenient way to create, buy, sell any item – both physical and digital. WAX has successfully facilitated the trading of millions of NFT partnerships from companies such as Capcom, Atari, etc. NFTs on WAX differ from NFTs on other platforms in their enhanced virtual commerce capabilities.

CEEK VR aims to become a leader in the virtual reality mobile entertainment market. Metaworld serves to provide interaction between musicians or artists and their fans through the NFT marketplace. In addition to digital services, the project offers patented headsets. Content from well-known artists such as Katy Perry and Bon Jovi is already available to users in the virtual city.

A blockchain platform whose main functionality is to create decentralized financial applications linked to the real world. The CHR token will become the main support tool for the Chromia blockchain in the future. It has grown more than 7,000% in 2022 amid the growing popularity of DeFi, NFT and Play-to-Earn games.

A platform with a full SDK for developers who want to create decentralized applications and integrate a full virtual goods world into them. All goods can be customized, permissions, commissions, etc. before being sold. The open and robust standard gives full marketing capabilities and the range to create business strategies.

One of the fundamental goals that the entire direction is aiming for is to create a single digital universe so that the user can travel with their avatar through any worlds. But this is still a long way off. So far, each metaworld is equipped with its own identification system. But if the key goal can be achieved, it will be nothing less than a new version of the Internet.

How to invest in and make money from meta-universe projects

Metaworld projects offer a fairly wide range of ways to make money – whatever the developers’ and users’ imagination allows. Each project initially formed its own economy, has its own token, marketplace, opportunities for trade and rewards.

Several options for investing in metaverse:

Where to buy meta tokens

Tokens are convenient to buy and sell on a variety of decentralized and centralized exchanges, such as:

Projects with meta-universes – what are they?

Blockchain projects which are virtual worlds that use decentralized, NFT, and gaming concepts related to virtual and augmented reality.

How can I make money from metaworlds?

The most common options for earning are project token trading, Play-to-Earn, and digital real estate management.

What is virtual real estate?

Plots of land or buildings in the digital world, which can be used to put your objects, exhibitions, etc., or sell/rent to other users.

Does the metaverse sector have prospects?

Yes, experts give very good forecasts – a significant growth of the sector in the coming years and its penetration in different areas of life, especially workers.

The most promising projects?

Decentraland, The Sandbox, Axie Infinity have been consistently in the lead for a long time.

Where to buy or sell meta-universe tokens?

These tokens are in the listing of most crypto exchanges. To find out where a particular token is traded, use CoinGecko or CoinMarketCap aggregators.

Despite the fact that meta universe projects are still in their infancy, it is already clear that they will be highly popular for a long time to come. Players can create their own in-game items, own them, buy real estate, interact with other users, and earn from it all. New solutions regularly appear that make the infrastructure even richer, give more opportunities for self-realization and profit. The niche is still very young, so it makes sense to follow the best projects with metaworlds – they are developing very actively.