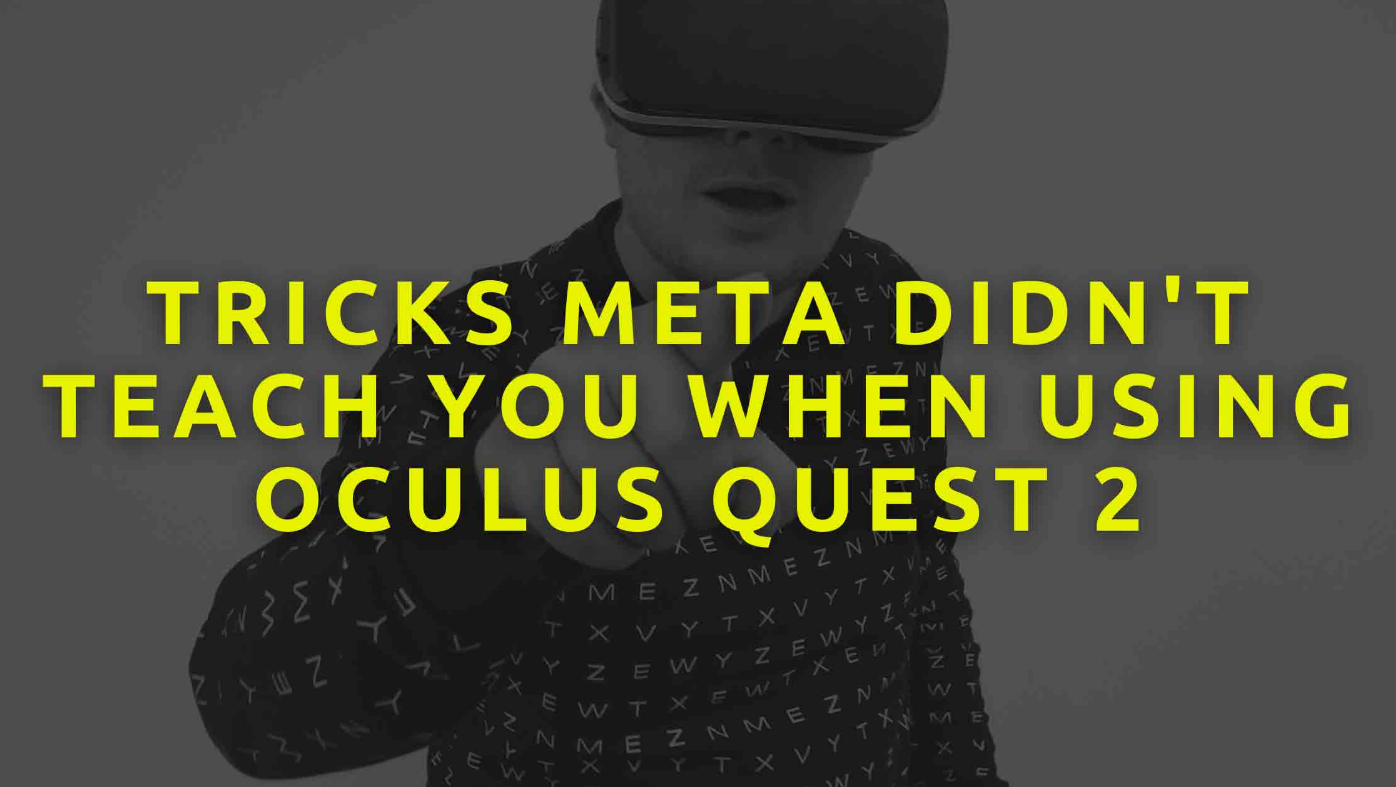 Today I come to show you some tricks, commands and utilities that Meta forgot to mention when you bought your new Oculus Quest 2 and that will be quite useful.

And this is not only a failure of this company, as many times watching lifehacks on the internet we discover things we didn’t know about our mobiles, appliances or even Smart TV’s.

I have to say that this post will be oriented to Oculus Quest 2, but most of them are also applicable to its predecessor Oculus Quest 1.

1- Turn off the viewer when you are not using it.

Many times when we finish our gaming session, we press once the button on the side and leave our viewer suspended for later use more quickly or simply take it off and plug it into the power.

This practice is ill-advised for several reasons, first of all while suspended the viewer is configured to keep sending and receiving packets to Meta servers.

Apart from the paranoia on the internet that the viewer with its sensors is recording you, it is true that this can slow down the internet connection of other devices.

On the other hand, turning off the viewfinder will help us to prolong the life of its lithium-ion battery so that it does not lose neither duration nor efficiency with the passage of time.

Many times we see something exciting within an application or game and we want to take a screenshot to immortalize that moment. Well, there are two methods and I bet one of them was unknown to you.

First there is the traditional method by which we go back to the application menu, hit share and choose the screenshot option, which is done after a few seconds.

But there is another trick that Meta forgot to mention in Oculus Quest, this is as simple as simultaneously pressing the Oculus button and the right trigger. Then we will hear a sound that tells us that the capture is already done in less than 1 second.

On several occasions while using the Oculus Quest 2 unexpected events occur inside or outside the guardian system that make us have to remove the viewer. Some of the examples are the intrusion of a pet, a chat with the spouse or just being thirsty.

For that, Oculus provides us with the option to activate the passthrough with a couple of taps on the side of the viewer. This option can be enabled in the settings menu by having the developer mode enabled.

If you do not know how to enable developer mode on your Oculus Quest or Oculus Quest 2 in this tutorial I show you how to do it step by step.

This trick may be one of the simplest of all but one of those that work best especially for static games like Beat Saber or Creed: Rise to Glory where the movement is more important than the buttons.

This trick works best with people who have small hands, but if this does not convince you and you want to gain comfort I recommend that you use the Grib Kiwi.

It has happened to all of us that in a moment of absolute hype we have bought a game from the Oculus Store and when playing it we have been very disappointed.

But don’t be alarmed, your money is not entirely lost. Meta has a refund policy whereby if you have not played more than 2 hours in the first 14 days after purchase you get your money back to your Oculus account.

To request a refund from your phone all you have to do is:

6- Turn off the guardian system

This trick for Oculus Quest 2 is one of the things I least recommend doing, especially if you are new to Virtual Reality as it can have catastrophic consequences.

Turning off the guardian system is an option that appears in the menu once we have the developer mode activated in our viewer.

I recommend turning off the guardian system when we are going to use our viewer in a static way with games like DEMEO or watching a movie in Virtual Reality.

This trick is great for people who are currently not doing well with Oculus Airlink and still using their viewer connected to the PC via cable. During some Windows events it debugs the USB connections by disconnecting and connecting.

To prevent this from happening just go to the Windows search engine and look for Power Options and change the settings of the plan we are using.

Then we select the advanced settings and once there we look for the USB debugging option and make sure that this option is disabled.

8- Transferring video files to a PC

Another Oculus Quest 2 trick that Meta did not specify anywhere is how to transfer our media files (screenshots or videos) to our PC.

The simplest way would be to make the video and then upload it to our Meta account (you can do it privately), which after all is what the company wants, that its platform is used.

But if we connect the viewer to a PC via cable, a message will appear inside the viewer to allow data transfer. We accept it and we can find our files in the following path:

All of us who have a Virtual Reality viewer know that there is only one way to see clearly and that is by wearing the viewer correctly.

New users abuse a lot of the elastic bands on the sides of the visor causing red marks around the face, but to tell the truth this is wrong because the important band is the upper one which is the one that will make us gain stability.

Anyway the elastic band of the Oculus Quest 2 has never been the best option I strongly recommend the use of third party attachment rings such as the BOBOVR M2.