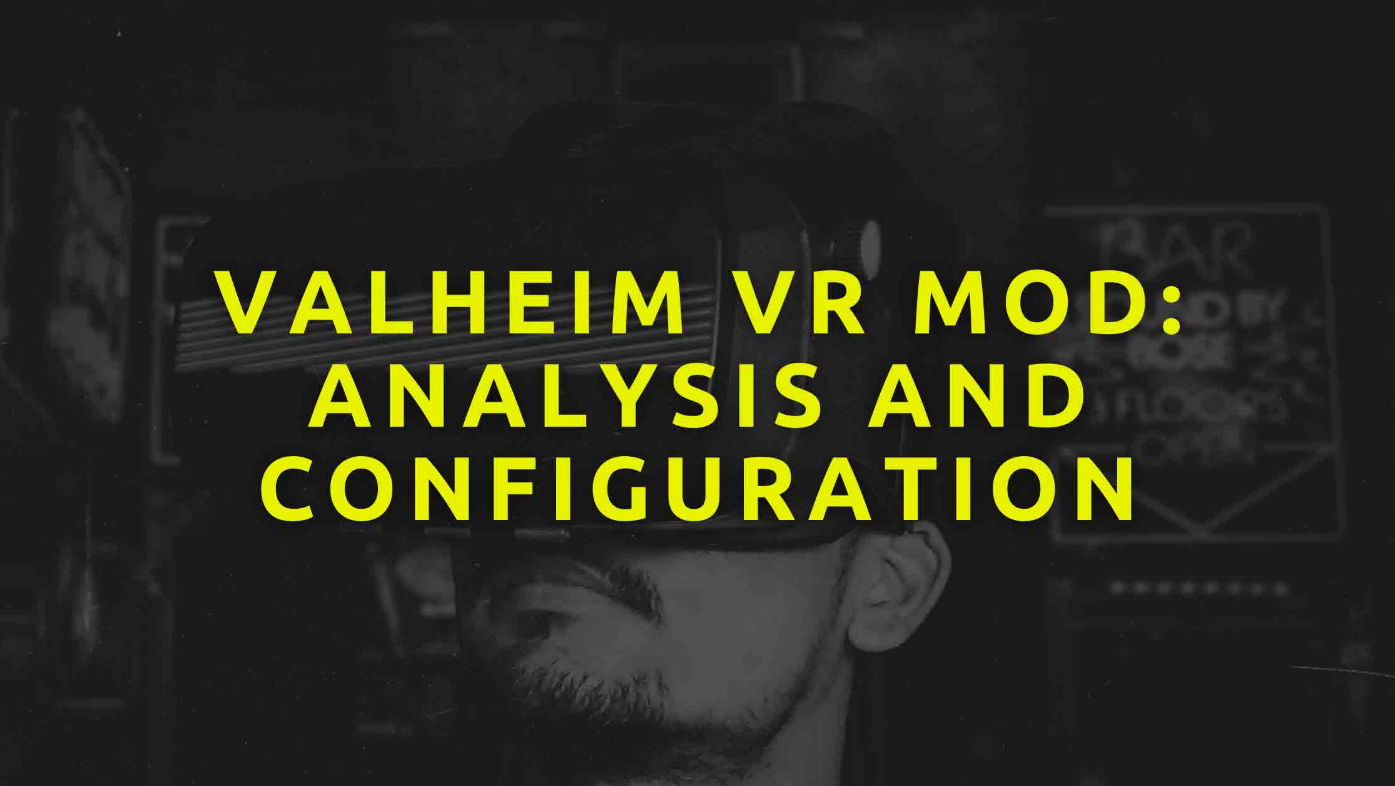 Some time ago a modder (Brandon Mousseau) released a mod to be able to play Valheim in VR, this mod only allowed the first person but did not support the controls of the different viewers.

But recently this has changed and now we can enjoy this game having a total and immersive experience in Virtual Reality.

Valheim is a procedural exploration and survival game set in Norse mythology with multiplayer through host or servers.

In Valheim we will embody a warrior killed in battle, then the Valkyries will take us to Valheim, the tenth Norse world. Once there Odin will speak to us through one of his ravens giving us instructions.

The objective of the game is to progress and perfect our equipment until we can defeat the ancient enemies of Odin that are generating absolute chaos in Valheim.

We are going to make a quick step by step guide to install the mod manually in the clearest and simplest way possible for you to avoid laziness or having to translate long tutorials.

First we install the base game from the Steam platform and run it once to create the necessary files in the root folders.

Once executed we start installing the BepInExPack Valheim, which is a preconfigurator of mods of the game that will add the necessary files for the mods to run correctly.

To install the BepInExPack Valheim we download the files in Zip format from the link we have provided before and unzip it in the location where we have installed the game:

Once this is done we proceed to do the same with the VHVR mod, we download it and unzip it in the root folder, leaving the folder with these files:

The Valheim Mod in VR is installed, if your computer is a Windows these steps are all you have to perform. Now the only thing you have to do is to put on your Virtual Reality viewer and run the game in the desktop icon.

This will open a MS-Dos window where it will launch a series of commands indicating that the mod is installed and ready to use. Then the solo will automatically launch in SteamVR, if we use Oculus it is the same procedure.

Now it is possible that the game looks strange, I have personally tested only with Oculus viewers (Oculus Rift and Oculus Quest) and both gave me the same problem.

During the first menu screen the left and right lens seem to have a lateral decompensation where we can see the flames of the fire in two places simultaneously.

With this setup we are going to make Valheim VR look as good as possible, but I would recommend that if you have a high-end PC, experiment with all the settings.

This configuration is optimal for a mid-range PC with an i7-7700k and a GTX-1070 graphics. The most important thing is to disable Anti-Aliasing which is responsible for the lateral decompensation.

Another option that I recommend to remove is Motion Blur that will give us a bad feeling when moving and Sun Shafts that will make in some cases blurred particles.

Finally, although in the image is set to High I recommend lowering the quality of the shadows because when we turn these can make strange movements.

If you have played Minecraft VR these controls will not be at all uncomfortable or annoying, on the contrary. Although I have to say that the option to leave the user interface fixed is missing.

Now I’m going to leave some images of the official mod where you can see the controls of each controller of the different Virtual Reality viewers and I will also include a couple of things that I think are not very clear.

The creator of the mod has not yet included an image with the Windows Mixed Reality controls that use the HP Reverb G2, but we confirm that these controls work.

Two types of control that I have been able to experience and that are not explained are the launching of arrows with the bow, which must be taken from our shoulder. And on the other hand at the time of building and turning the pieces we would have to press the grab of the left controller and then rotate the structure with the joystick of the right controller.

I personally had already played Valheim on a monitor before, so the construction and crafting didn’t surprise me for the first time, even so I was pleasantly surprised by how the mechanics have been implemented in Virtual Reality.

Although at first it may seem a bit cumbersome as each button does a different function, after a while you get used to it and end up using them naturally.

Another thing that has caught my attention is the way in which we craft by hitting trees with the axe or stones with the pickaxe. These actions feel pretty good and give you a plus of fun unlike Minecraft VR that you just had to pull the trigger.

Finally I would like to make a digression regarding the graphical quality of the game. We start from the assumption that the original game on monitor is based on a type of high-resolution pixel art.

The nearby elements that we can make out such as hands or weapons will be seen with pixels like fists, but even so they do not become completely uncomfortable to see.

Where the game really wins is in the landscapes, lighting and environments giving to highlight the branch of Yggdrasil that we can see during the day and the starry sky at night.