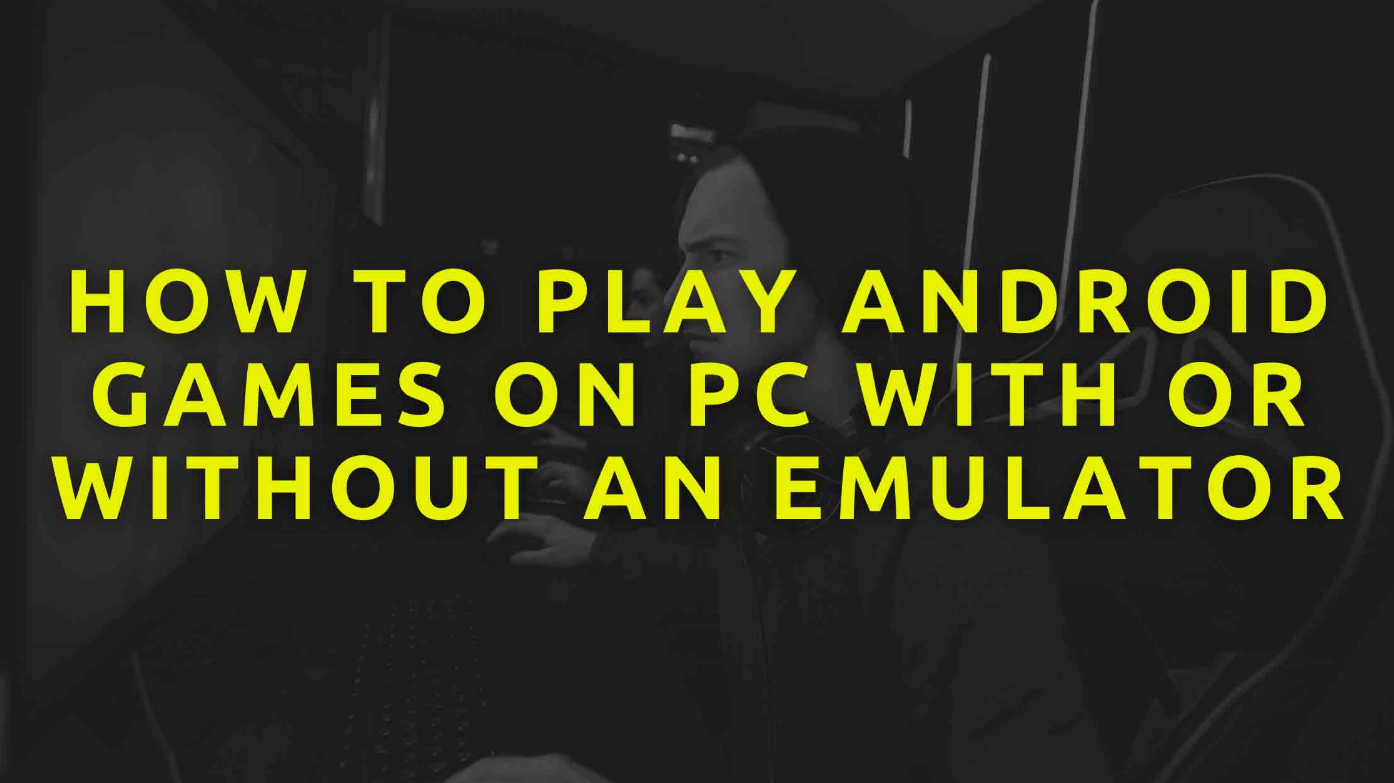 How to play Android games on a Windows PC using an emulator or even without one, by projecting the screen of the phone on the monitor.

There are many ways to bring a smartphone’s apps to a PC, but only some of them are optimized to play games and have better graphical fluidity when we start a game, so as not to compromise the quality of mobile games on PC while continuing to keep our fingers on the touch screen to play and, turning the phone into a controller on which to execute commands or move the character we’re playing with.

Let’s see in the following chapters what we can do to play Android games on PC without having to download an emulator, so we can turn any desktop or notebook computer into an Android game console without going crazy in the configuration of a traditional emulator (often problematic).

Compared to real emulators (which emulate the Android code to run the game on PC) we can also take advantage of game viewers, whose job is to display on the screen or computer monitor everything that happens on the phone or tablet, while maintaining the execution and control of the game on the mobile device used, taking advantage of a transmission on the screen very similar to that of the Chromecast.

Play Android games on PC without an emulator

The first app we recommend you try to play Android games on PC is AirMore, download from the Google Play Store.

To use this app for games let’s make sure that the computer and the phone/tablet are connected to the same Wi-Fi network then open the app on the device, open any web browser on the PC, connect to the AirMore website, scan the QR code with our phone’s camera (inside the app) and once the connection is established, press on the Reflector function to start transmitting the screen from the phone/tablet to the browser tab and finally start the favorite game on the phone, having well in mind the commands to be executed.

With this method, you can enjoy playing Android games on your PC using a simple and easy to configure tool like AirMore, which offers effective Android screen mirroring. For the gaming experience to be satisfying, make sure that the Wi-Fi network is stable and fast, perhaps aiming for the 5 GHz network for the occasion.

As a viable alternative to AirMore for playing Android games on PC, we can also try AirDroid Cast, available for download from the Google Play Store and in a client version for Windows.

To take advantage of this method we run the client on the computer, launch the app on the phone or tablet and then scan the QR code, so we can establish the connection. From that moment on, everything shown on the screen of your mobile device will also be projected onto the monitor of your desktop or notebook, so you can play with a higher level of detail than on the small screen.

Just as with the previous app, make sure that both devices (PC and smartphone/tablet) are connected to the same Wi-Fi network, preferring networks transmitted on the 5 GHz frequency (which tends to be faster and more stable than 2.4 GHz).

Another app for mirroring the Android screen on a PC is Splashtop Personal, which we can download for free from the Google Play Store.

Launching the app we’ll be asked to create a free account, with which we can connect up to a maximum of 5 devices. Once the configuration is complete, go to the PC and install the Splashtop client, downloading it from the official website; as soon as the app is ready, sign in with the same account used on mobile, add the PC to the associated devices and, still from the PC, press on the name of the phone or tablet, so you can see what’s happening on the mobile screen and also control the execution of the games.

The free version only works over Wi-Fi, so we don’t have to worry about using remote connection servers (TeamViewer-style, which this app is inspired by). As with the other apps we’ve seen so far, we recommend using the 5GHz network to play games.

If we want to try an emulator, ie a program that allows you to run Android games on a PC, then the best are two: BlueStacks, of which I have already spoken, and then Nox Player of which we speak now.

Nox App Player can be downloaded for free from the official website and the installation is all automatic and without sponsors or advertising.

Upon the first startup, you can immediately see the classic Android screen, with the Play Store to download apps and games, the file manager, Facebook Lite. On the right side, you will see many buttons in a vertical column that allow you to:

– Shake the phone, which is required by some games

– Capture the screen and photograph it

– Zoom in to full screen

– Multiplayer, to play with another person in a new program session.

The buttons on the bottom right are the three standard ones on any Android smartphone or tablet, the one to go back, the one to the list of recent apps, and the one to return to the home screen.

The ability to add an APK file allows you to install games quickly, without going through the Google Play Store (although it’s best to sign in with your Google account for better compatibility and to download all the apps you need).

To play the game, you must, perforce, install Google Play Services via Play Store or by downloading Play Services as an apk file from apkmirror and uploading it using the side button.

Ultimately, if your goal is to play mobile games on your computer (such as Clash Royale, Clash of Clans, FIFA 16, Need for Speed), Nox App Player is, at the moment, the best emulator program you can find, with excellent performance and response time, free and free to use. Nox Player is also optimized to play Pokemon GO on PC.

If our goal is to play mobile games on the computer such as Clash Royale, Clash of Clans, FIFA, Need for Speed, the apps seen in the guide are without a shadow of a doubt the fastest and most effective way to accomplish this scenario, without having to download an emulator and configure it to support Android games. As seen, the operation is similar to Chromecast, with the phone or tablet remaining the material executor of the game and the screen being displayed on the monitor or computer screen, to take full advantage of the potential of some games (which have nothing to envy to real PC games).