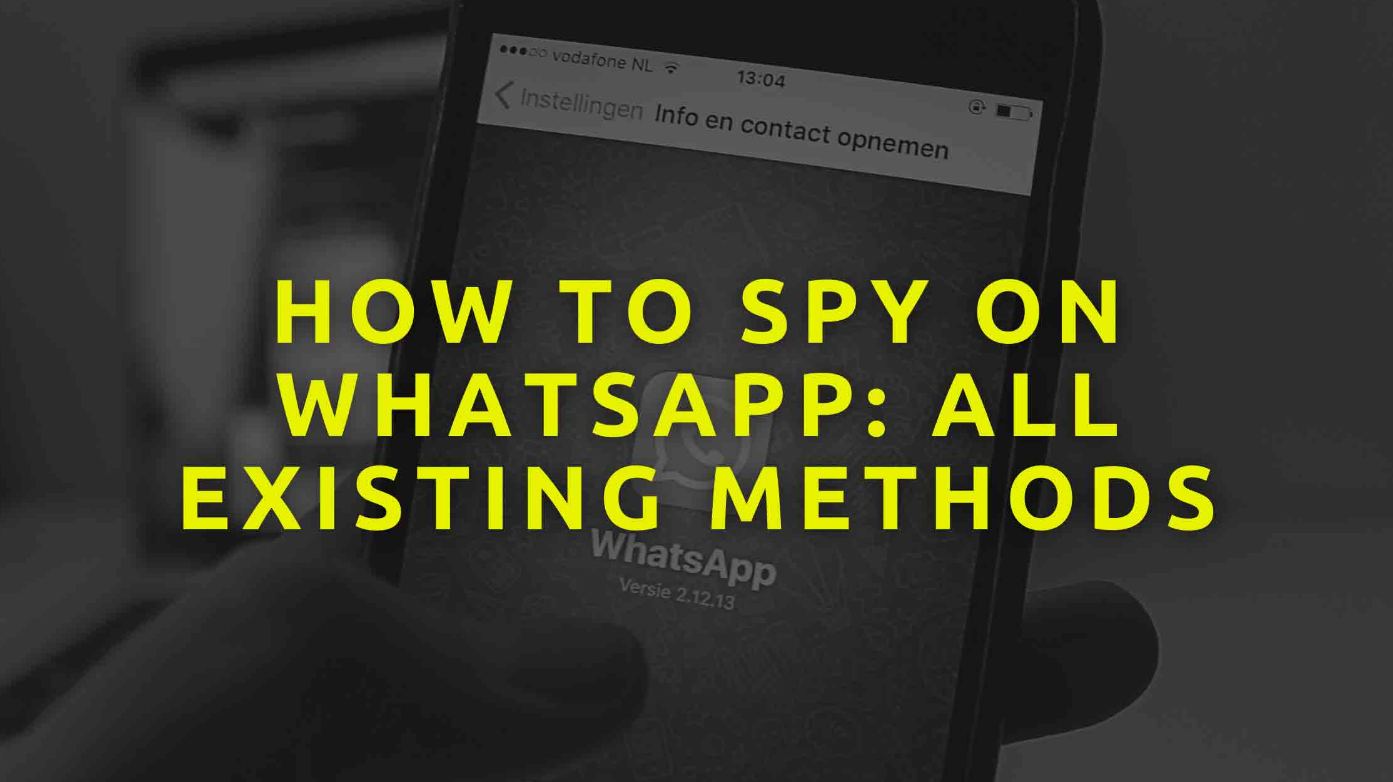 More and more users search the web how to spy on WhatsApp to try to intercept the conversations of another person. Spying on a smartphone in fact does not need – in some cases – to be experts in the field, and despite the extreme attention to security even for WhatsApp, there are methods that can “intercept” the exchange of messages.

For purely illustrative purposes, in this article, we will show you all the working methods to spy on WhatsApp (and more) on both Android and iPhone. Next, we’ll see how to protect ourselves from any sneaky ones and, most importantly, how to notice if someone is spying on us. In fact, below is a list of everything we will cover.

How to spy on WhatsApp conversations

This application is now extremely widespread and spying on WhatsApp is a very “sought after” practice. Obviously, the application over the years has tried to cope with these illegal practices in multiple ways. The most impenetrable barrier resides in the end-to-end encryption that (without going into details) allows maximum protection of messages exchanged between sender and recipient:

However, this type of “protection” can block those who try to spy on WhatsApp by interposing themselves within the conversation through a method called connection sniffing, which by the way is also quite difficult to put in place. The methods that we will show you instead, are much simpler and always work.

As said, the methods listed below are for illustrative purposes only, and we will use them as a preface to understanding how to defend yourself from WhastApp spies. Therefore, we will not be responsible for how the information within this article will be used. So let’s start with the simplest and most effective method of all:

1. How to spy on messages on WhatsApp Web

In first place among the methods on how to spy on WhatsApp is the use of WhatsApp Web, the web version of our messaging app. This method is by far the simplest and most effective because it will make it possible to control in all respects the WhatsApp profile of a person.

WhatsApp Web is nothing more than a website that allows you to use WhatsApp while you’re on your PC without taking your smartphone every time to answer a message. Using it is very easy because all you have to do is take your smartphone, go to WhatsApp -> Settings -> WhatsApp Web, and a camera will open.

Opening WhatsApp Web will appear in front of you a QR code (a box with black and white squares placed in a confusing way). By framing this code with the WhatsApp camera on your smartphone, immediately the PC will connect to your account and you will have a copy of your WhatsApp to use via PC:

In short, two simple steps, and if you want to spy on another person’s WhatsApp, all you have to do is follow the exact same procedure, but using the smartphone of the person you want to spy on. In fact, if you could get your hands on that person’s smartphone for less than a minute, you could practically take possession of their WhatsApp without them noticing.

By default, WhatsApp Web keeps the connection open, so every time you turn on your PC and go to WhatsApp Web, you can access that person’s account without having to repeat the process. However, if you don’t have a PC or you don’t have access to the smartphone of the person you want to spy on, then this method should be discarded. Let’s see another one.

2. App for spying on WhatsApp

There are many apps that can spy or read information from profiles, and in this regard, we had already written an article on Apps to spy on WhatsApp where you’ll find the best ones in absolute and without the need for root or Jailbreak. Here are the apps we’ve selected:

App to spy on WhatsApp that can monitor the activity of a WhatsApp contact. Just enter the phone number of the people you want to spy on and WhatsAgent will notify you when that person is online for example, and for how long, with the ability to cross-check between multiple contacts. Free for a limited time only:

Very similar to WhatsAgent, this WhatsApp spy app monitors the activity of one or more WhatsApp users and sends notifications for status updates (and more), in real-time. Free only for a 24 hour trial period, after that, you’ll have to pay a subscription: Chatwatch is an app that is that allows you to spy on WhatsApp both on Android and iOS allowing you to derive information obtainable from the WhatsApp profiles of your contacts. In particular, it checks the frequency of access, duration of each access, and the times when the person is online. Free only for the first 24 hours, after which you can decide whether to purchase a subscription:

These were in our opinion the three best apps to spy on WhatsApp, but it doesn’t end here because there is another app we want to show you that is completely free and much more powerful than the apps we saw above. In our article on how to spy on WhatsApp and read conversations we told you about a very powerful app: let’s see it!

For some, it might be inconvenient to have a PC at hand, but with Whatscan there is no need! Take the smartphone of the person you want to spy on for a few seconds and – via their WhatsApp – go to Settings -> WhatsApp Web. This will open the camera that will want to scan a QR code.

If, however, you have direct access to the device of the person whose WhatsApp you want to spy on, then the best way is to use a monitoring or parental control software so that you have full access to the entire device and not just WhatsApp.

This software is nothing more than a parental control app, which is a program that can monitor all activities on a smartphone, including apps like WhatsApp, Facebook, SMS, calls, and more. Once you install such an app on the smartphone of the “victim”, it will be like having it in your hands! KidLogger is the best monitoring software for Android. To use it, you’ll first have to create an account (from the official website) that you’ll then use to monitor the smartphone on which you’ll install KidLogger (downloadable from the download page).

Once KidLogger is installed on the victim’s smartphone, launch it and check the boxes: “Connect the app to your KidLogger.net account” and “upload activity log files”. That’s it: go back to the site, log into your account and monitor all the person’s activities.

On iOS it is more difficult to find apps to spy on WhatsApp, but with a Jailbroken iPhone, you can take advantage of many apps offered by Cydia, not present on the App Store then. Here is a couple of them:

The last resort to be able to spy on WhatsApp is to clone the MAC address of the smartphone you want to “control”. We decided to stay this practice for last since it is the most complicated to perform: not only because some computer knowledge will be required, but because you will have to have access to that person’s smartphone for a while (technically at least 5/10 minutes).

That said: what is the MAC address? Also known as the MAC address, this 12-digit code is unique to every device in the world because it allows you to identify its properties and hardware! That’s right, no two devices have the same MAC address (and that’s all you need to know for now), but what would happen if you managed to clone the MAC address?

Simple: if someone knows your MAC address, following a procedure, is potentially able to “pretend” you in the eyes of WhatsApp and then spy on you without any difficulty. Unfortunately, you will need an unlocked device via root or jailbreak to install apps like BusyBox and Mac Address Ghost on Android and SpoofMAC on iPhone.

You’ll find the MAC address of the smartphone you want to “clone” inside the Settings (usually) in the Device Info. Once you have cloned its MAC Address, all you have to do is install WhatsApp and start it normally by entering the phone number of the person you want to spy on. At this point, the SMS with the code will arrive on that smartphone (that’s why you’ll have to keep it handy) and you’ll be able to complete the configuration.

How to defend yourself against spying

Here’s some good news: defending yourself from sneaky people isn’t complicated at all! Those who are looking for methods on how to spy on WhatsApp will always be “lucky” to have on the other side a person who is distracted and not very attentive to privacy.

In short, just a few small measures and no one will ever be able to spy on WhatsApp or your smartphone in general. In this regard, we have written a very detailed guide! Take a look:

In a few steps, you can defend yourself from WhatsApp Web spying, for example, by disconnecting the devices connected with the service. Or you can lock down your personal information (like your status, last login, and so on) to defend yourself against WhatsApp spies using monitoring apps. Or you could always protect WhatsApp with a password.

To defend yourself against all the other methods we have shown you, the only thing you have to do is not to leave your smartphone unattended or – and this should be done periodically – to check the apps installed on your device for strange apps or even key loggers. That’s it!