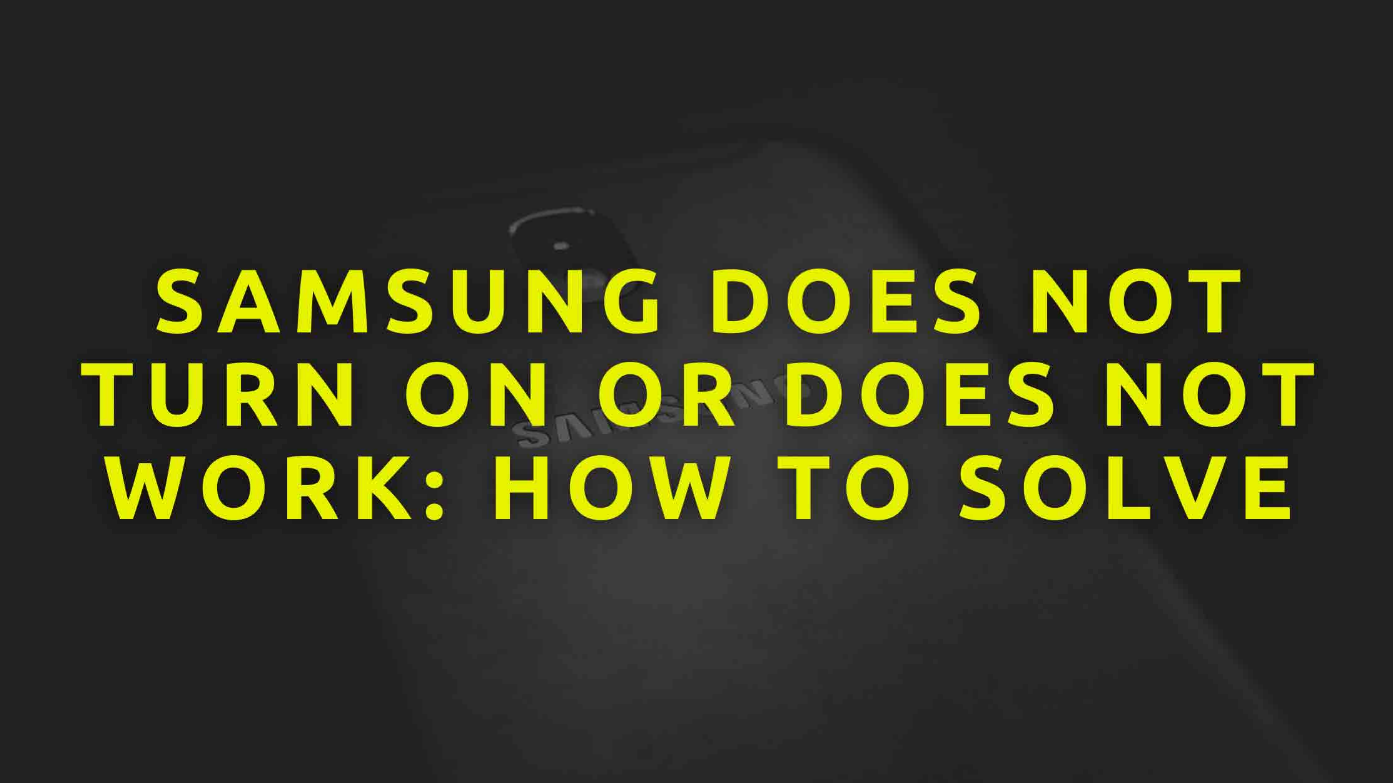 Has your Samsung smartphone or tablet stopped working? Let’s see how to fix any startup issues.

Samsung smartphones and tablets are still the most desired and popular technological devices, thanks to the combination of design and technical features often innovative (at least on phones sold at the high end of the market). Like all technological devices can present sudden problems difficult to handle for new users: impossible power on, always black screen, reset the appearance of their Samsung “in the loop” without any subsequent feedback, even after several minutes of waiting.

If you’re in one of these uncomfortable situations, you’ve come to the right guide to solve it: in the following chapters, we’ll show you how to restore a malfunctioning Samsung, following some simple tips that can be easily applied to all Samsungs on the market (including those with a few years on their shoulders). Although the problem may seem unsolvable, in reality, you just need to follow a few simple tips to restore a Samsung that does not work or does not even turn on. Before taking your phone for service or warranty to the store, carefully read the tips offered in the following chapters.

Sometimes it is enough to forcefully reboot the phone or tablet to regain control of the situation, especially if the device froze when turned on or in the lock screen (without any reaction). To force reboot any Samsung we press and hold on the power button or power key for at least 15 seconds until the Samsung logo appears again.

This simple procedure should be enough to restore proper operation of a Samsung phone stuck on an app, stuck on any phone screen, or stuck in the unlock screen (without any reaction, even using the fingerprint or unlock path).

If the Samsung smartphone or tablet doesn’t turn on at all, doesn’t seem to give any signs of life, and doesn’t even show the Samsung logo with the forced reboot, probably the battery is too low to show the classic startup procedure of the device.

In this case, we recommend you change immediately the wall charger and the charging cable, to remove any doubt about the charging system used so far. If we do not have other chargers or want to buy a new one, we bet decidedly on the original Samsung USB Type-C charger.

Using this charger we can immediately charge a smartphone unknowingly unloaded, perhaps because we were convinced of the goodness of the old charger in use (even the original chargers can break after some time, so we should change it regularly).

Excluding charging damage, we can try booting into Safe Mode to test whether the problem was due to a faulty app installation or some misplaced system settings. To activate Safe Mode on Samsungs we reboot the phone (even forcibly, as seen above) and, as soon as the Samsung logo appears, we leave the power button and quickly press the Volume Down button.

The phone will reboot again and, when the boot screen appears, we will notice the presence in the lower-left corner of the word Safe Mode. Once we have received this confirmation we use the phone and, if there are no problems, we proceed by uninstalling the last installed apps or trying to restore the change we made (if we can remember it!). When done, we restart the phone again and proceed to

If all previous attempts have not been effective and your Samsung doesn’t turn on or doesn’t work, we can try the first advanced trick that involves deleting the cache partition, which is useful for solving recently occurred problems.

To delete the cache partition we turn off the device (if it is not already turned off or is locked when turned on, we proceed with a forced reset) and follow one of the procedures described below:

We will enter in the recovery of the device, once in this screen use the volume keys to choose items and the power button to confirm each operation. To proceed, go to the Wipe cache partition item, press the power button (or Power) and confirm again on the screen that appears. At the end let’s go to the item Reboot System now and check if after restarting the system everything works again without any problems or freezes.

How to reset Samsung

If not even the cleaning of the cache has solved the lock of the Samsung device, there is nothing left to do but restore the operating system to factory settings, so you can start over. Before proceeding, we always check that we have an active backup for all the apps and services we care about: we can learn more about this by reading the guide Recovering data on Android: Photos, SMS, numbers, and apps. After making at least one backup, we go back to the device’s recovery (as seen in the previous chapter), select Wipe data/factory reset, press the power button and confirm to start the Samsung formatting process.

We wait for the phone to reboot and wait a few minutes; the first boot may be slower so don’t worry if 5 minutes pass on the Samsung logo (start worrying if 15 minutes or more pass!).

Even a Samsung now and then can act up, but with the tips and tricks seen in the previous chapters, we will be able to solve most of the problems which we can run into with a smartphone or tablet of the Korean company.