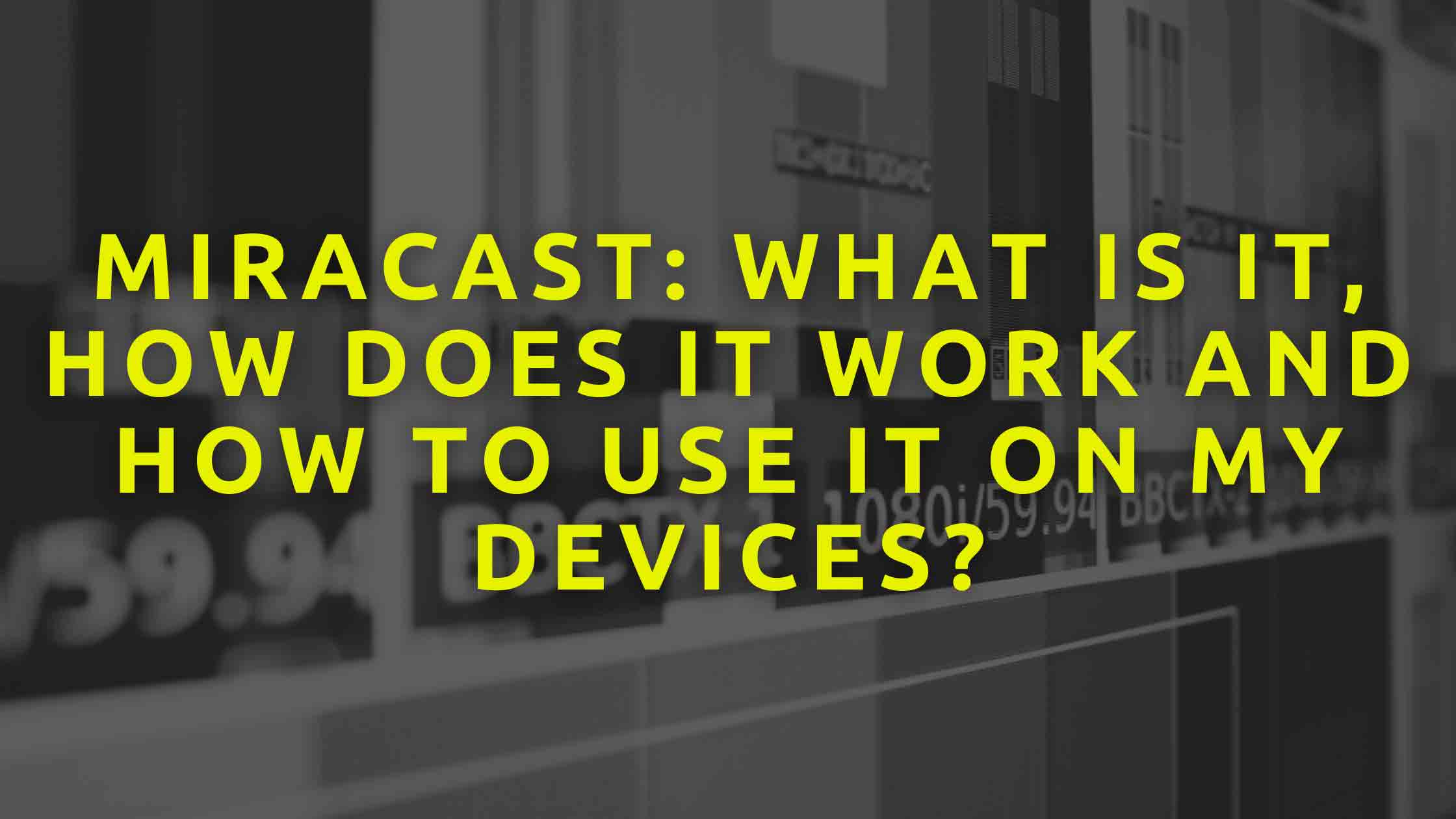 Find out about Miracast. It is undeniable that with the passing of time technology surprises us more, the great progress we have seen in the field of telecommunications and entertainment is so great that every day has something new to show, in this sense, transmit or connect the screen of a cell phone to the smartTV today is a very simple task since we have USB or WIFI connections that allow us to enjoy these benefits.

Currently there are applications, programs that help to establish the necessary connection for the transmission of what we see on our mobile to a larger screen, Miracast is a useful protocol for projecting content from one electronic device to another that we can also use with Windows and Android. If you do not know much about it, in this article we will talk a little about Miracast, its function and how we can use it on our device.

What is the main function of the current Miracast?

As we have mentioned before, Miracast is a protocol that allows the connection between two devices achieving that the screen of one is reflected on the other which gives us the privilege of being able to observe the visual material that we have in the video library of our mobile or in our laptop, on the TV screen being this possible only if the two devices are compatible with Miracast. This is focused solely and exclusively on the projection of the screen of one device on the screen of the other, which means that if we want to send an HBO series to the Smart TV using this technology, the screen of the mobile device must be on for the entire duration of the programming.

This happens because what the protocol actually does is to show on the big screen what we are supposed to be watching on the small screen so basically Miracast becomes an effective and wireless alternative to connecting wired devices such as HDMI.

How does Miracast work for screen projection?

The way Miracast works is very simple, what it does is to send content via WIFI Direct, a technology designed to facilitate direct communication between devices, which also performs exchanges at a much better speed than if we were using Bluetooth, to the point that sending data can reach a speed 10 times higher. It should be noted that even though we are using a technology that bears the name WIFI, it does not mean that it is necessary for both devices to be connected to the same network.

It is not necessary because when we use Miracast on a mobile or PC to transmit content on a compatible Smart TV we have to create an Ad-Hoc network that has many advantages and uses WIFI for the connection between the two devices. If the connection is successful, the delay is almost nonexistent so everything we see on the mobile we can see on the TV.

What are the pros and cons of using Miracast on our devices?

Of course everything has its pros and cons so Miracast also has them, first, speaking of the advantages, this protocol has a copyright system, has a level of protection WPA2-PSK, which is nothing more than a security system rated as one of the safest of the moment, Additionally we can reinforce it with a password of up to 63 alphanumeric characters plus a shared key that if that were not enough generate new passwords to prevent malicious actions of hackers.

Finally, unlike other protocols such as Google Cast that we can easily configure, Miracast was designed as a cross-platform standard. Now, not everything can be good, if we have to mention the disadvantages, we must highlight the fact that it is only useful to reflect the screen of a device on another and not for sending content as if it happens with other protocols, another drawback has not managed to be a reliable protocol because in many opportunities it does not work as it should.

Procedure to activate Miracast on any device

It is well known that many Android manufacturers for multiple reasons have stopped supporting Miracast on their phones, instead they have replaced it with Google Cast, although some still include it in the Send Screen option that we can easily locate in the quick options.

As mentioned, we can activate it from the quick options of our Smartphone to which we have access when we slide our finger from the top of the screen down, there we discover the options, what we must do is look for the option or button ‘Send Screen’, we activate it and perform some other configuration if necessary such as granting permissions for the transmission of content.

Since the Miracast service for iPhone is quite a mystery, what we can do is to use the service to duplicate content from Android to Smart TV of any known and unknown brand.

In the case of Windows, the procedure as in Android is quite simple, once we open the Windows notification center we can click on the ‘Project and Connect’ option, if the computer happens to support Miracast, it will be one of the various technologies that we can use to achieve connect two electronic devices and thus be able to project the content of one on the other.

The tool used by Apple to share content is called Airplay and allows different devices to connect to each other for the playback of any type of multimedia material from one to the other using a signal through a network.

What problems are usually encountered when interacting with Miracast?

There are several problems that can occur when interacting with Miracast, one of the most common that we can find in the problem in the addition or connection of a wireless display that we can solve by restarting the computer or adapter, another common problem is blurred text or stuttering images that we can solve by changing the screen resolution.